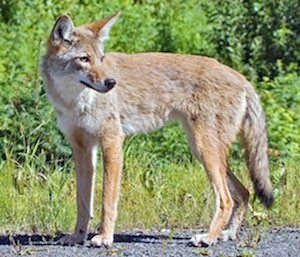 Following the coyote sighting in Manhattan just two weeks ago, and more than one documented coyote sighting in Queens during the past few weeks, some Nassau County residents have expressed fears and concern. Could the coyote population creep into Nassau County? Will they be the next new arrivals in Great Neck, right over the Queens/Nassau line? And while Nassau County reports no sightings, county officials offer safety tips should a coyote be sighted in Nassau County. Nassau County Executive Ed Mangano and the Nassau SPCA (Society for Prevention of Cruelty to Animals) just issued an informational report on safety and behavior tips in the event coyotes do reach Long Island.

Mangano assured that “there is no need for alarm or panic…no sightings in Nassau County at the present time,” but it is better for residents to be prepared, as some biologists do predict the eventual arrival of coyote communities settling in Nassau County.

Making Nassau County residents aware of this eventuality, Mangano advises, if you do see a coyote, dial 911 for the police. And absolutely do not allow coyotes to approach people or pets.

If faced with a coyote, be safe. Keep “unintentional” food sources locked up or inside the home. This includes food that may attract coyotes, other wildlife and increase risks to people and pets. Never feed coyotes and do not feed personal pets outside (and be careful feeding feral cats outdoors and afterwards remove all food). Also, eliminate the availability of bird seed and keep the site clean, as the concentrations of birds and rodents at feeders can attract wildlife.

Be sure that garbage is inaccessible to wildlife; fence or enclose compost piles so they are not accessible.

To keep young children safe, teach them to appreciate wildlife from a distance in order to avoid the risk of being injured.

If someone is confronted by a coyote, they are advised to stand tall and hold arms out to look large. If a coyote lingers for too long, then make loud noises, wave your arms, throw sticks and stones. Do not run away. According to wild life experts, running away after seeing a coyote is behaving like prey.

People and pets, too, are at risk in the event of coyote neighbors. Do not allow pets to run free. Supervise all outdoor pets to keep them safe from coyotes and other wildlife, especially at sunset and at night. Small dogs (even if on leash) and cats are especially vulnerable to coyotes. Keep cats indoors. Conflicts between dogs and coyotes can happen any time of the year, but are more likely in the months of March and April, when coyotes are setting up their denning areas for the soon-to-arrive pups.

Property should be kept safe, too, with fencing for backyards that may deter coyotes. The fence should be tight to the ground, preferably extending six inches below ground level, and taller than four feet. Property owners are also advised to remove brush and tall grass from around their home to reduce protective cover for coyotes. Coyotes are typically secretive and like areas where they can hide.

Mangano’s safety tips also advise residents to also be aware that people do coexist with coyotes, but caution, care and common sense must be used. But be careful.

The SUNY College of Environmental Science and Forestry tells us that the coyote has been present in New York State at least since 1920. These ecologists tell that they have learned a lot during the past 50 years about what they term “this newest addition to our wildlife community.”

And remember, although coyote attacks on people have been historically rare, the concerns are not unwarranted in light of more recent events. Such attacks have become more frequent as both coyote and human numbers have increased and have been reported in several states (including New York). The best advice is to follow the county’s safety tips and precautions, should coyotes move into our neighborhood.

Frank Vincenti, known as “the Fox Man” locally, does not believe that coyotes have come to Great Neck, at least not yet. Vincenti heads the nonprofit Wild Dog Foundation, headquartered in Mineola, and though he confirms that red foxes have long been settled in Great Neck, no coyote sightings have been confirmed. Vincenti added that the average person can be frightened by a neighborhood fox, often mistaking it for a coyote. Red fox sightings are frequent in Great Neck, especially in the northern parts of the peninsula. “The Fox Man” told the Great Neck Record that for coyotes to establish a home in Great Neck would be difficult; coyote families appear to be traveling east from the city areas and if seeking a new home, would travel along a “corridor” such as the Northern State Parkway. Northern Boulevard would not be a coyote route from the Alley Pond area; the animals would be more likely to travel along the wooded Northern State, bypassing Great Neck.

So far, no experts nor any government agencies have documented coyotes found living in Great Neck. However, no one has ruled out the possibility of a stray coyote finding its lone way to the peninsula. And, no one is ruling out eventual sightings. Caution is advised.