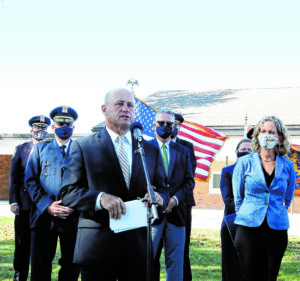 On June 18, presiding over the swearing-in of 161 new police recruits—including his son Liam—Nassau County Police Commissioner Patrick Ryder tearfully proclaimed that he would not be resigning after what he told reporters was a rough couple of weeks. Ryder’s comments to Newsday last month blaming broken families on the paucity of minority representation in the force drew calls for his resignation from civil rights groups and even police fraternal organizations.

However, the only person who could remove him—County Executive Laura Curran—stood firmly against the demands for his firing, even as Ryder’s critics pointedly called for putting pressure on her in this election year.

“I have full confidence in Commissioner Ryder’s leadership of the police department, and he will be staying in his position,” Curran said in a statement released June 21.

“Commissioner Ryder has championed the community policing model now being embraced nationwide as part of reform efforts. We will continue to focus on keeping Nassau safe while moving forward with police reform that builds trust between law enforcement and the communities they serve, including implementation of body cameras by the end of the year and a new committee to help diversify the department.”

On that same day, hundreds of people showed up in front of the Theodore Roosevelt Executive and Legislative Building in Mineola to show their support for Ryder. People held signs that read, “We Support NCPD Commissioner Patrick Ryder,” “Thank You Police Commissioner Patrick J. Ryder,” “We Call, They Come. Now They Need Our Support,” and more.

At the rally, which was surrounded by a heavy police presence, people took turns at the podium stating why they want Ryder to stay where he is.

In an interview with Anton Media Group last month, Ryder admitted that despite heavy recruitment, it was difficult to hire minorities. He noted that in a recent police exam, only half of minority applicants had shown up. Though they make up 17.5 percent and 11.3 percent respectively of the county population, Hispanics (7.9 percent) and Blacks (4.2 percent) are underrepresented in the police force (see graph). Of the 161 recruits at the ceremony, only 12 Hispanics, five Asians and four Blacks were sworn in, according to Newsday.

The county executive distanced herself from Ryder’s comments, telling Anton Media Group, “I don’t think that family makeup has much of a difference on diversity or lack of diversity in the police department.”

Curran recently set up a 10-member Police Diversity Committee chaired by Bishop Lionel Harvey of the First Baptist Cathedral of Westbury. Harvey also serves as the deputy director for Diversity and Engagement in the county’s Office of Minority Affairs.

“We’ve always had a very good relationship in terms of being able to speak to one another candidly,” Harvey said of Ryder. “I believe that he considers me one of his confidants. I told him that his words were unfortunate and inappropriate. And I still stand by that. But it comes down to your words and your work. His work is second to none. I think he’s done wonderful work being out in the community and dealing with the various problems that arise. He’s always reachable, always available to speak and do what is necessary to represent his office well.”

Harvey acknowledged the criticisms of the county’s police reforms by his fellow Malverne High School grad and civil rights lawyer Frederick Brewington, who has called for Ryder’s removal.

“Fred is entitled to his opinion. Meanwhile, we’ve been given a task and we’ve been laser focused on doing what we need to do to get some results,” Harvey stated.

Legislature Minority Leader Kevan M. Abrahams (D–Freeport) called Ryder’s words “offensive, inaccurate, and a cause for deep concern,” but did not demand that Ryder resign or be fired.

Ryder did not return an email seeking comment on the rally.