Representatives from the New York Civil Liberties Union (NYCLU) spoke about the wireless Smart City technology system being installed in the Village of Great Neck, connecting all of the LED lights in the area to a central computer, to an audience of approximately 40 residents who braved the frigid 19-degree temperature to attend the presentation at Great Neck House on Jan. 14.

In his 45-minute PowerPoint presentation, Schwarz explained the implications of Smart City technology, which has the capability for both audio and video surveillance.

“Schwarz described the many ethical and technological issues associated with these wireless systems,” explained Amy Glass, PhD, a Great Neck resident who has done extensive research on the topic. “Although the advertising hype emphasizes increases in efficiency, the hidden agenda of these systems is the collection of massive amounts of data about the daily lives and habits of the citizens. Several important questions arise, such as: How reliable is the system; who owns the data; where is it stored; how safe is it from being hacked; who will be allowed to access this data; and for what purposes will the data be used.”

Great Neck resident Judy Shore Rosenthal has also been outspoken about her concerns.

“Great Neck residents are taking part, unknowingly, in a 10-month pilot program of new devices and applications with the intention of collecting data,” said Rosenthal. “It became instantly apparent to many in the room that our mayor and, in fact, no Great Neck mayor has the type of professional expertise to have taken this on. This is highly sophisticated technology, so our leaders are in the dark even as they sign up for it. This is dangerous for their reputation and our citizen protection. The irony is, we are so uninformed as a community that we don’t know enough to be concerned about this topic of Smart Cities. That’s how our leaders get away with the implementation.”

The NYCLU representative explained that this is an aggressive initiative by private companies seeking enormous profits from this billion-dollar industry. Great Neck Plaza and Lake Success are currently in the process of making wireless decisions, including 5G, that will affect the health of Great Neck citizens, so it is important to understand the implications.

“We know, for a fact, that at any moment 5G technology will be showing up everywhere. AT&T is rolling it out in a big way,” said Rosenthal. “Elected leaders must do their homework—whatever it takes to become educated on their own time—not simply listening to salesmen in front of them at board meetings with a profit incentive. This is particularly crucial when it comes to making decisions on welcoming the new wireless technology to Great Neck. There are extremely serious implications for the community’s health and well-being—and not being properly informed is no excuse.”

Schwarz’s data slide highlighted the seriousness for citizens to be taking part in these Smart Cities without awareness or consent. According to Schwarz, once the system is in place, an individual homeowner cannot opt out.

“Everything is about data collection,” noted Rosenthal. “Who really owns it? What do they with it now and in future? After they are in place, there is a complete loss of citizen control with data use. This is where the enormous profits are in this billion-dollar industry. It is aggressive. It participates in racial profiling. Leaders accept the truth from cameras and sensors no matter what it captures, even if it is a partial truth. Humans cannot argue against it and defend themselves. That is scary.”

Glass added, “We’re entering a new age as we speak and, for the most part, the public is stumbling in the dark, with no knowledge of what we’re facing. These Smart City systems are being installed all around the country—this is not just Great Neck we’re talking about. We desperately need to understand more about what’s happening if we have any hope of controlling these technologies. The good news is that information is available on the Internet, if you look beyond the advertising hype. Look on the NYCLU site, and on the Grassroots site, for more information. It is very important that we continue to voice our concerns to politicians at all levels. As with any other issue, the powers that be count on our apathy—they can proceed with whatever plans they want to, with no accountability at all. The Smart City system can be thought of as part of the ‘Internet of Things.’ This term refers to objects that have the ability to communicate information to the cloud, as well as to receive information from individuals. Examples are remote-controlled thermostats, coffee makers and vacuum cleaners. These devices seem innocuous but, in fact, they are constantly transmitting information to the cloud, which is collected into large data-sets and analyzed by various companies for their own reasons, with the expectation of reaping tremendous profits.” 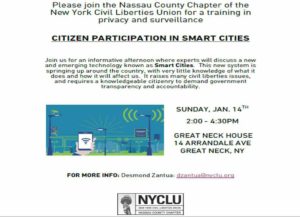 The audience was captivated by Wood’s discussion and Q&A. Both Gottehrer and Wood were still surrounded by residents answering questions for a half hour after the three-hour program ended.

“Residents simply did not want to leave,” said Rosenthal. “They were hungry for answers to their many unanswered questions.”

If you, your friends or neighbors are upset with the new village LED streetlights, the consulting company responsible for the recommendations will be at the Village of Great Neck meeting on Tuesday, Feb. 6, at 7:30 p.m. at Village Hall, 61 Baker Hill Rd. Come with your complaints or suggestions and talk face-to-face with consulting company representatives who are coming from out of state to hear what residents have to say.

“RealTerm Energy consultants are also responsible for the Smart City wireless technology already installed at all VGN light poles,” noted Rosenthal.“The New York Civil Liberties Union views Smart City technology as a threat due do the invasion of resident privacy. Please share this story with your friends and neighbors, and please come to the meeting to express your concerns and complaints. This affects all of us.”