More than 150 religious leaders, organizations and elected officials attended the Long Island March Against Anti-Semitism on Sunday, Jan. 12, denouncing the hateful and shameful attacks that have plagued the tristate area against members of the Jewish community the past several of months.

On the steps of the Theodore Roosevelt Executive and Legislative Building in Mineola, Nassau County Executive Laura Curran, Suffolk County Executive Steve Bellone, U.S. Senator Charles Schumer, Congressmen Tom Suozzi and Peter King, Congresswoman Kathleen Rice and many others spoke to a crowd around 5,000 who came out against anti-Semitism.

“I want to thank each and every single one of you for coming out today,” Curran said to the crowd. “We are Republican, we are Democrat, we are Nassau, we are Suffolk, we are Jewish, Christian, Sikh, Muslim, Buddhist and we are all together as human beings joining together to say that hate has no place here on our beautiful island. We are here together in solidarity to stand with our Jewish brothers and sisters to say that we have got your back.”

Bellone thanked Curran for bringing everyone together and reminded everyone that this year’s Holocaust Remembrance Day on Jan. 27 is the 75th anniversary of the liberation of Auschwitz.

“We are one island and we are coming together,” he said. “It is crucial that we all come together in this nation because if we cannot provide the leadership in the United States of America—the one nation on this Earth where every form of humanity exists—if we cannot lead by example, then what is the hope? We must do better. This gives me great hope.”

This past December, Nassau and Suffolk counties formed a bi-county coalition that will identify and develop a plan of action to combat and report acts of hate and bias incidents on the island. In conjunction with a number of organizations, Sunday’s march marked one of the task force’s inaugural initiatives.

Schumer, who is the highest elected Jewish official in the U.S., thanked everyone for marching and told a heart-wrenching story about his family when he took to the podium.

“My great grandmother and grandfather had 18 children,” Schumer said. “The youngest three came to America and the other 15 stayed in the Ukraine. The Nazis came in 1941. My great grandfather was gone, but my grandmother was the matriarch of the family. The Nazis came to her and said for her to get her entire family and come to the porch. Thirty-one people did, from the ages of 85 to three months. The Nazis said, ‘You’re coming with us.’ She said we’re not moving. They machine gunned every one of them down dead. Unfortunately, people then did not speak up strongly enough or soon enough. We will never let that happen. America is not Germany. It’s a great country of freedom and diversity.”

Additionally, Schumer, Suozzi, King and others are sponsoring legislation to provide $360 million to protect synagogues and other houses of worship, having the federal government involved with local law enforcement to find and attempt to stop hate crimes. 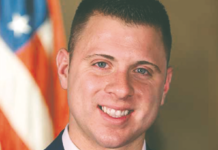 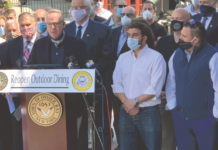 Phase II Of Reopening Kicks Off With Outdoor Dining

Shed The Meds Drive-Thru Event To Be Held In Great...