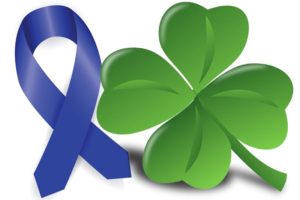 To many, March means St. Patrick’s Day. It’s about chasing leprechauns, plucking four-leaf clovers and kissing any drunken fool wearing green, no matter how much or how little Irish heritage they have.

I have never been a fan of St. Paddy’s Day. To me, it has nothing to do with its Irish roots, and instead is yet another excuse for Americans to binge drink and make a mess of themselves, the bars they visit and the parade route along Manhattan’s Fifth Avenue. Those who overindulge during this holiday are a danger to themselves and the innocent bystanders driving beside them on the road.

Beyond green-clad revelers, March is a time to focus on a far different danger—colon cancer. Ever since 2000, March has been known as National Colon Cancer Awareness Month and is a rallying point for thousands of patients, survivors, caregivers and advocates throughout the country to spread awareness by wearing blue, holding fundraisers and getting screenings to detect the dreaded disease.

According to a recent study by the American Cancer Society, colon and rectal cancers are on the rise in 20- and 30-year-olds. The study says that someone born after 1990 has double the risk of developing this type of cancer than people born in 1950. This alarming statistic is likely due to obesity, poor diet and a sedentary lifestyle.

This is no longer a health issue that can wait until the age of 50 to address. Jump on Google and find a local clinic offering free colon cancer screenings.

So, on March 17, instead of going green with dyed beer, bagels and cookies, make an effort to schedule a colon cancer screening. Not only will you possibly save your own life, but you will be far less annoying to the many of us who prefer not to be on the receiving end of your St. Paddy’s-induced shenanigans.