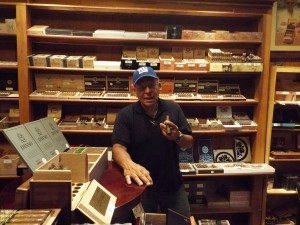 Marshall Holman, who’s been running Tobacco Plaza (TP) in Great Neck for 30 years, loves fine handmade cigars and says that a comparison can easily be drawn between them and fine wine.

Holman is in partnership with sons Michael and Randy, Ken Isaacs and Danny Ditkowich, at TP’s very popular shop that stays open from early morning to late at night at 218 Lakeville Road seven days a week.

To those who might criticize smokers who appreciate cigars, Holmes contends, “Cigars are like wine to the point that if you like wine, that doesn’t make you an alcoholic. Having a glass of wine occasionally, they say, is very healthy. I don’t know if it’s true or not, but you can have a cigar a day, a cigar a week and relax. And, you must smoke slowly to enjoy it.”

“Handmade cigars are all-natural,” he adds. “There are no chemicals.”

Sports fans are especially attracted to Tobacco Plaza, frequently jamming the parking lot of the strip mall just south of Northern Boulevard to watch a game, enjoy their favorite cigar or just meet with friends.

It’s a unique experience that’s hard to duplicate, claims Holman, who moved to the present location in 2000 after 15 years on Northern Boulevard where Great Neck Road and Buttonwood Road converge.

“There are other cigar stores, but they’re not like this,” said Holman, who’s in his early 70s, and had his first cigar when he was 17. “We make people feel comfortable here. Our customers have become our friends.”

“The other thing we have going here is the camaraderie. I know just about everybody who comes in here. I know their family. They know mine. I know what they do for a living.”

As they enter the store, Holman enjoys putting customers together who may not know each other. “I introduce them to each other,” he says. “They sit down, and they put on the game. They become good friends.” Often there are as many as 30 to 35 customers watching an event. Monday Night Football and the Super Bowl are times that Holman cheerfully admits can get hectic.

Holman and his wife, Vicki, have been married almost 50 years and have a third son, Glen, and eight grandchildren. He commutes from his home in Commack.

“This particular business is not like any other business I’ve ever seen,” Holman continued. “People come in here and they spend 20 minutes, an hour, three hours, and it’s comfortable. They relax inside. The world is outside.”

“You can’t do this kind of thing anymore,” he explains. “Where else can you do it? Stand outside of an office building smoking a cigarette? You’ve got to be 15 feet away from the building? Here people are free to relax.”

One of Holman’s good friends and customers, Michael Wach, who owns the Great Neck Diner with his daughter, Rorie, agrees.

“It’s hard to give one specific reason why Tobacco Plaza is a such wonderful place to go,” said Wach. “Let’s just say if you go to TP on any given day, there’s wonderful conversation, story- telling and camaraderie, day or night.”

Holman bought his first tobacco store in 1972 with his father and is quick to correct the casual observer who mistakenly thinks the best cigars are from Cuba.

“In 1959, when Castro took over in Cuba, that was the premier cigar growing country in the world,” Holman explained. “They were number one. No one else was even close. All the great cigar makers left when Castro nationalized the country.”

“The best cigars now come from Nicaragua, the Dominican Republic and Honduras,” adds Holman, whose current favorite is a cigar by Jaime Garcia, a super thick brand from Nicaragua.

Quality cigars at Tobacco Plaza can range from $7 to $15 and up. Holman and his partners usually have a monthly special event, bringing in a different manufacturer each time to offer special blends and discounts.

Another attraction for his customers is the availability of individual lockers that can be rented and used to store their favorite cigars.

Surprisingly, Holman has never smoked cigarettes. “I never thought cigarettes were good for your health,” he recalled. “There’s chemicals, there’s tar and there’s nicotine. You inhale them. Even the paper has chemicals in it to keep it from going stale. Handmade cigars are a totally natural product.”