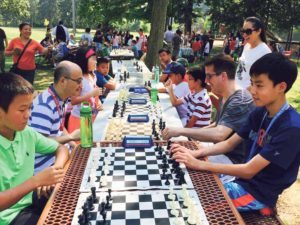 Ever since my brother Wesley and I started playing chess, we have always wondered: Why don’t more young kids play, considering it is not an expensive activity to pick up? We, at CHESSanity, strongly feel that many kids lack the exposure. The primary goal of this particular Chess-in-the-Park event reflected CHESSanity’s main goal: to promote and spread chess throughout communities on Long Island. The nonprofit is dedicated to teaching the game to children to help build their self-esteem and confidence.

It was a beautiful day on Sept. 10. With school having just started, most kids had resumed their normal weekend schedules, playing piano at music school, kicking soccer balls for the new season or attending various crazy extracurricular activities. Unlike other high school juniors, my friends Ethan Li, Oliver Liu, Henry Qi and I were not studying our AP courses at home or doing any SAT test prep. Instead, we were laboring away at Allenwood Park in Great Neck, moving tables and chairs, setting up chess boards and attempting to direct excited young kids around the park. As strong chess players and volunteers, we were helping out at Long Island’s third annual Chess-in-the-Park event, which turned out to be a booming success.

More than 100 players, including a boy as young as 4½ from Queens and a girl as young as 3 from Manhattan, came for the excitement and atmosphere. Each participant either came to play, learn or join a simultaneous exhibition against some of the top young stars on Long Island. Some die-hard chess enthusiasts even stayed for five hours and participated in all three attractions.

Hearing the news, at the last minute, Bella Liu of Great Neck, canceled the planned family trip to Six Flags to attend the event. She said, “It is a great way to develop friendship in such a relaxed environment between the kids who have common interest and passion.” 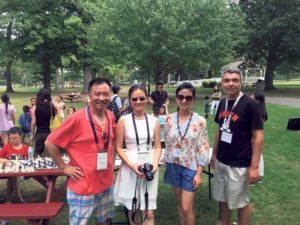 The benefits of playing chess are significant. Although many might not be aware of this, Long Island has become a sort of “haven” for chess success. Out of the 94 U.S. qualifiers for the upcoming World Cadets Chess Championship, five talented young competitors reside on Long Island. The five players, who include my own brother and CHESSanity Cofounder Wesley Wang, Evelyn Zhu, Katherene Qi, Liran Zhou and Ellen Wang, were honored for their achievements during the event.

ChenXin Xu, founder of NYMA, shared her observations. “I am a pianist. I did not know anything about chess before. I am amazed today by the dedication of these players and their quick minds, and the camaraderie and gracefulness these strong players demonstrated over and off the board, win or lose,” she said. This fall, NYMA has started to offer a chess program at its Great Neck location.

The event was concluded by three simultaneous exhibitions, with the main one conducted by Ethan Li, the top scholastic chess player on Long Island. Facing 10 strong players simultaneously, including Bella Liu’s son, Vincent Tsay, an expert-level player, Li managed nine wins and only one loss, with the last board ending way past 6 p.m. on Saturday evening.

Winston Wang, my father, couldn’t help but share his excitement about the success of this year’s event. “We have seen so many new faces this year and the kids are young, too. What a great era for them to learn and enjoy chess! What a difference these 10 years have made since Warren first started chess.”

I have personally witnessed the rise in overall enthusiasm for the game among students, parents and communities throughout the country. But, compared to other more conventional activities, chess still has a long way to go.

The positive feedback from many participants and their parents was immense. They are already looking forward to fourth annual Chess-in-the-Park event next year. My brother and I are very proud of the legacy we are creating. We are determined to continue holding these events for many years to come.