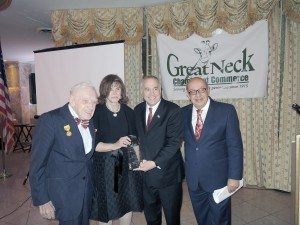 With cheers and awards, the Great Neck Chamber of Commerce celebrated its centennial last Thursday evening, April 30. Former Great Neck Estates mayor Murray Seeman, who is almost a year older than the Chamber of Commerce, received the Centennial Award with his wife, Town Councilwoman Lee Seeman. The President’s Award went to Congressman Steve Israel. Other awards included: the Jesse Markel Award to Roger Chizever, Rotary Club of Great Neck; the Robert E. Freedman Retailer Award to Vic and Val Santelli, Santelli & Son Inc. and to Rachel and Norman Lee, Tennis Junction/Sportset. The 2013 Business Person of the Year Award was given to Dennis Grossman, DMI Consulting Group and the 2014 Business Person of the Year Award to Scott Zimmerman, Aura Salon & Style Lounge.

Congressman Israel, although unable to attend the dinner due to pressing business in Washington, sent a heartfelt thank you via a video. Israel represents New York’s 3rd Congressional District, which includes Great Neck. He is the sixth ranking member of the House Democratic Leadership and serves on the vital House Appropriations Committee.

New York State Comptroller Thomas P. DiNapoli presented the Centennial Award to Lee and Murray Seeman. The Seemans have long worked for Great Neck in many capacities, both in government and in the private sector. DiNapoli, a long time friend, praised Lee Seeman for her many years of hard work and noted that, no matter what else she did, Lee was always most proud of her work as program chair for the Chamber. Introducing Murray, DiNapoli stated: “Murray Seeman is incredible…I love Murray.” With much affection and appreciation, DiNapoli thanked the Seemans for all they have done and will continue to do.

Jesse Markel Award winner Roger Chizever received his award amidst much applause. The highly popular and hard-working insurance broker is always busy helping others. “A valuable and important member” of the Chamber, said Chamber of Commerce President Hooshang Nematzadeh.

Robert E. Freedman Retailer Award recipients Vic and Val Santelli run Santelli & Son Inc. and are following in the family landscaping business begun in Great Neck in 1956. The business started on just one acre of land, always including many Santelli family members during busy seasons. “Truly a family business with deep roots in the community,” said Nematzadeh. Also receiving the Robert E. Freedman Retailer Award were Rachel and Norman Lee, original owners of Tennis Junction/Sportset. As they celebrate the 41st anniversary of their store, they were announced as the longest-run Great Neck business, continuously run by the same proprietors.

Grossman, 2013 Business Perswon of the Year, is president and CEO of the DMI Consulting Group, founded in 1981, A creative problem solver by profession, Grossman offers his skills and services to a wide variety of local boards and councils.

Zimmerman, who received the 2014 Businessperson of the Year Award, runs the bustling Aura Salon & Style Lounge. Zimmerman is known for his strong commitment to supporting and promoting local businesses. He is always looking to the future for the Great Neck business community.

The Great Neck Chamber of Commerce looks forward to the next 100 years.