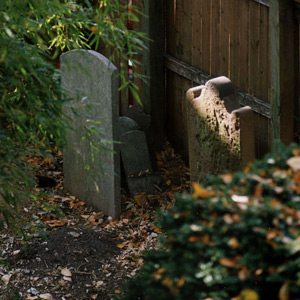 There’s renewed hope that plans for the restoration and preservation of the Allen Cemetery, a 20 foot by 10 foot abandoned property nestled between the backyards of two homes on Pearce Place in Great Neck Plaza can soon move forward.

The optimism for the project’s completion came from the Town of North Hempstead’s historian Howard Kroplick during his appearance last week as a guest of the Great Neck Historical Society. “We’re going to be meeting with the Great Neck Plaza people, probably, within the next month,” said Kroplick, “and really come up with a plan. We’ve been working with them for about a year-and-a-half.”

“We’ve been working not only with the Plaza but with the Great Neck Historical Society on it, and with the Allen family, too,” he added. “We had to get all of our legal documents together.”

Kroplick kept the Historical Society audience gathered in the Community Room of the main branch of the Great Neck Library enthralled during an hour-long multimedia presentation on both the history of Great Neck and of North Hempstead. Having recently published a history of North Hempstead as part of Arcadia Publishing’s Images of America series, Kroplick also participated in a book signing with all proceeds going to his favorite charity, Child Abuse Prevention Services.

Introduced by Society President Alice Kasten, Kroplick gave credit to former Town Clerk Leslie Gross, also in attendance, for advising him throughout the process of writing the book. “It was very challenging to go through over 5000 documents and reduce it to 200 that could fit,” remarked Kroplick. Gross wrote the foreword to the book.

While giving a very concise, concentrated history of North Hempstead, well illustrated with many images and documents from the book, Kroplick interspersed his presentation with information of particular interest to Great Neck residents.

Among the many well known and not-so-well known items that Kroplick mentioned in regard to the area were: the song “Over There” was written by George M. Cohan, was composed in Cohan’s Kings Point home; Groucho Marx purchased a home in Thomaston in 1929 while he starred on Broadway and films made in New York; the Long Island Rail Road’s first Great Neck Station was built in 1883; D.W. Griffith, the legendary filmmaker, made a movie with W.C. Fields in Russell Gardens in 1925; there is an actual saddle “rock” and it’s in Little Neck Bay and somewhat resembles a saddle in shape; while many are aware that the temporary home of the United Nations was in Lake Success, few remember that the actual vote establishing the Jewish state of Israel was taken there; North Hempstead was part of Queens County until 1899.

Kroplick went into further detail about the Allen cemetery during his presentation. “This is on private property,” said Kroplick, who serves North Hempstead in an unpaid position. “This was the dispute. Nobody knew who owned it and basically it’s the Allen family that still owns it. If it’s abandoned, it’s the town’s responsibility. Towns are responsible for abandoned cemeteries (under state law). But we’re going to be working with Great Neck Plaza. And I’m very optimistic that it’s going to be worked out.”

By using ground penetrating radar equipment at the site last July, it was confirmed that there were actually six members of the Allen family buried there during the 19th century. The gravestones had been moved and propped up against a fence but the graves are still there. Currently, there is no public access to the site, but the property can be seen from the second level of the Gussack Plaza Garage (behind Village Hall) by looking over the back wall.

“We’re waiting for our town attorney, who’s coordinating with outside counsel for Great Neck Plaza to set up a meeting and we’re hoping for a meeting in late May or early June,” Kroplick said.
The Allen family, at one time, owned nearly one third of the Great Neck Peninsula. “The whole area around the municipal lot was part of the Allen farm,” Kroplick added. Daniel K. Allen’s will specified that the cemetery would remain in the family when he left the farm to two of his nephews in 1861.