Last Thursday was anything but a normal day at the Great Neck Diner for owner/manager Rorie Wach Miller and it had little to do with the heavy snow that covered Great Neck Plaza.

CBS Television’s popular Elementary series chose that day to take over the diner, owned by Miller and her father, Michael Wach, with a crew that numbered as many as 100. It was a long day that lasted from 8 a.m. to almost midnight.

The diner, which has been operating for almost five years on the old Frederick’s site at the corner of Grace Avenue and Bond Street, was closed for business during the filming.

For Miller, it was a long, but exciting day for her as she got to meet and speak with one of the show’s stars, Lucy Liu, who plays Watson in the modern day version of the Sherlock Holmes story.

Liu, who’s had a successful career in both movies and TV productions, from her starring role in the movie version of Charlie’s Angels in 2000 to a featured role in TV’s Ally McBeal, is the second actress of note to film in the Plaza this year. Tina Fey filmed scenes on Overlook Avenue in January. 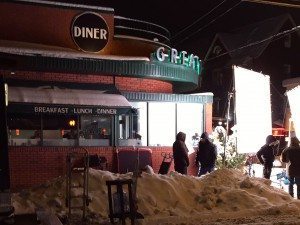 Liu was the only one of the show’s regulars involved in the day’s activities.

“I welcomed her to the restaurant when she came in around 6 p.m.,” Miller said. “I told her how excited we were about the filming. She was lovely and sat in a booth rehearsing her lines and sipped green tea.”

Miller was also selected to appear in the episode, that is scheduled to air some time in April. “They hired me as an extra,” she said. “”I stood at my post at the register and I pretended to do a transaction with one of the other extras who would come up and hand me a fake check.”

“They had a busload of extras come in. They staged them throughout the whole restaurant, kind of like our regular customers. They had a fake chef in the kitchen pretending to serve the food that my own chef made.”

Miller’s chef, Ernesto, was given a list of dishes (including cheeseburgers, salads and desserts) to prepare for the scene, in which Liu was to be seen sitting at the counter having a discussion with another actor.

Miller, who had previously worked at Sony Pictures, New Line Cinema and the Martha Stewart TV show, was fascinated with the inner workings of the production crew.

“It was interesting to see how much production work goes into just five minutes of film,” she continued. “There was crazy weather and it was pretty much ‘sit around and wait’ most of the day, as different crews came in and out.”

Miller experienced an emotional moment early in the day and admitted that she was nervous about how things would go with the project.

“I knew my mom was going to be here with me,” she explained, speaking of her late mother, Ronny, who first opened the diner with her husband and was a regular presence herself behind the register. Ronny Wach died after a long illness two years ago.

“The first crew member to show up and come in the door and shake my hand and introduce himself, introduced himself as ‘Ronnie.’
That was a sign for me that mom would be with me all day and make sure that everything went well. It
was amazing.”