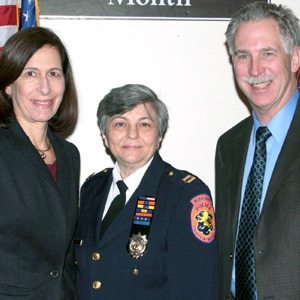 D’Amelio was born in Italy, and later settled in Great Neck in the mid-1970s. As a young woman with a strong work ethic, she paid her way through Queens College with her earnings and tips from waitressing at local restaurants.

While still in college, she began working in the mailroom of a market research firm. Within three months, she was offered a full-time supervisory position, and over the years rose to the title of Vice President of Operations. During this time, she directed client donations of food and consumer products to many charitable organizations including The Inn, Island Harvest, and Long Island Cares.

She first became involved with the Nassau County Auxiliary Police after she answered a Great Neck Pennysaver advertisement. She patrols her community to ensure the safety of those she has come to know over the years. She is the Auxiliary Police Liaison to the Village of Great Neck, Village of Great Neck Plaza Business Improvement District, Department of Public Safety, and the Town of North Hempstead. In addition, she is a popular speaker for the Lakeville Elementary School’s Stranger Danger Program. D’Amelio also speaks at University Gardens Property Owners Association’s Homeowners Safety programs. She is ever vigilant in her efforts to keep the citizens of Great Neck, Roslyn, and Port Washington safe, and takes her job seriously and with a selflessness that is beyond the call of duty.

The Nassau County Auxiliary Police isn’t the only beneficiary of Captain D’Amelio’s watchful eye. She has given countless hours to Meals on Wheels, the Lioness Club of Glen Cove, North Shore Hospital’s Lions Eye Bank (transporter of corneal tissue), the Great Neck Co-Op & Condominium Council, and the Board of the Kings Point House. Soon, she will be receiving the prestigious 1000 Hour Service Award from the Nassau County Auxiliary Police.