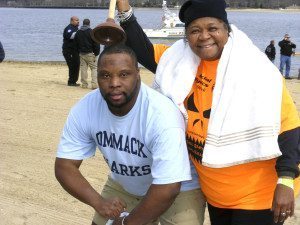 The 12th Annual Polar Plunge was held at North Hempstead Beach Park on Saturday, March 5. This wonderful event was hosted by the Town of North Hempstead, the Special Olympics New York and Town Supervisor Judi Bosworth. All donations will be given to more than 65,000 children and adults pursuing their Olympic dreams. Money raised from the Polar Plunge will help to provide training, equipment, uniforms, travel and food for all participating athletes. They will be given continued support and opportunities at no cost to them or their families. Last year nearly $1 million was raised statewide. 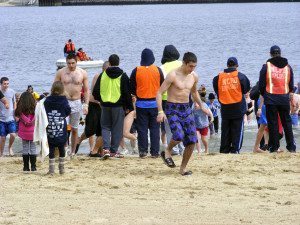 This year, approximately 500 people took the plunge into water that was 38 degrees. Participants included people from the community and Special Olympic athletes. The event was supported by members of the Port Washington Police District and fire department and many elected officials. Bosworth, a staunch supporter of the Special Olympics, said, “This is a way for our community to come together and show our support for the great efforts of our wonderful athletes.”

Diane Colonna, regional vice president of development, emphasized the support and commitment of our community and said, “I just love being here.” 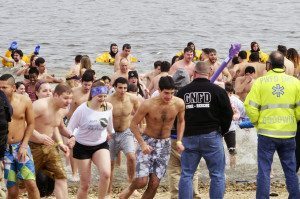 Mitch Schwartz, copresident of the Port Washington Chamber of Commerce who was one of the top fundraisers, said, “going in the water is not as bad as coming out.”

T.J. Timmons sang a beautiful rendition of the National Anthem, heartwarming speeches were given and plaques were awarded. There was food, music and festivities and it was a great day for those who braved the cold water as well as for the spectators.