Laying in bed, recovering from an injury, Jeannie Brand began to remember her childhood, the positives and negatives, her high and low points, and started to draft a memoir of her life. As recollections of her younger self came to her mind, the memories of her father grew more and more, his most impactful quotes jotted down by her side. And after months of writing, Brand completed her memoir, her stories of growing up alongside her famous father, recovering from struggles and beginning a family that continues to spread
the legacy of her father to this day.

Brand, a former Great Neck resident, is the daughter of the late singer-songwriter and author Oscar Brand. With assistance from childhood friend Lawrence Gerzog who convinced her to tell her story, Brand began her memoir, The Folksinger’s Daughter, two years before her father’s passing. 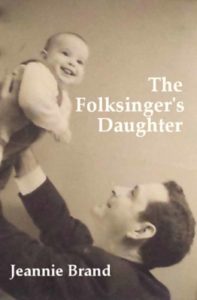 “The Folksinger’s Daughter is definitely my story, with my father the constant thread throughout,” Brand said. “The one constant throughout the story is my father’s generosity; I cherished our close relationship and spoke to him every day.”

Brand begins her memoir describing her home, which was always filled with music and where she would be surrounded by noteworthy people such as Eleanor Roosevelt and Jean Ritchie. At her father’s radio show The Folksong Festival, she and her brother learned more about her father’s fame and the industry he found success in. After understanding the impact of her father’s musical contributions (oftentimes hearing endless compliments about her father and seeing her father conduct auditions for Broadway in her living room), Brand became interested in writing.

“I had moved nine times by the time I was 18…and I was old enough to understand that my adventures were interesting to other people and the idea of a book was always there,” Brand said.

After studying at Stony Brook University and contributing numerous works to literary magazines, Brand moved to Washington, DC, with her spouse, her father making frequent visits because of his activity with the Smithsonian Folk Festival and his program on NPR. By now, she understood her father’s impact not only on other performers but also on his audience.

“He was never boring, loved the history of songs and was always approachable,” Brand reflected.

Brand took a job as a salesgirl for a busy jewelry shop in downtown DC, eventually opening
up her own store closer to her home and her son. After having an injury that needed bed rest, Brand discovered Facebook and contacted many of her childhood friends, many of whom were pushing her to tell her story.

“My father taught me generosity, a smile for everyone and that we all have a story to tell,” Brand said. “There was a lovely tribute at his friend Pete Seeger’s Clearwater Festival this past June and the World Folk Music Association is planning a Remembering Oscar Brand concert in Rockville, MD, in October.”

Brand’s completed memoir is available online on Amazon and Barnes & Noble and may be found in select bookstores in the near future.