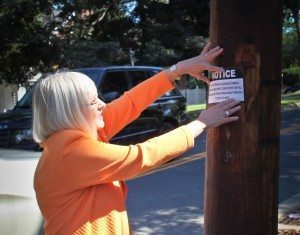 Town of North Hempstead Supervisor Judi Bosworth is continuing to urge PSEG Long Island to use nontoxic preservatives on its utility poles, after it was reported this week that the utility company would start transitioning away from using the controversial preservative pentachlorophenol (penta) and towards using a different one called CCA, or Chromated Copper Arsenate. Penta and CCA are both restricted-use pesticides and are approved by the EPA for utility poles. CCA contains known carcinogens when inhaled or ingested.

“It seems that PSEG is just exchanging one poison for another,” said Bosworth. “Simply trading penta for CCA doesn’t make sense or address the issue. I will continue to urge our utility companies to use non-toxic treatments for wooden poles or to begin using composite poles or another safe alternative.”

In a letter to PSEG-LI President and CEO David Daly, Bosworth stated: “Cost-saving measures that put citizens’ health at risk are short sighted. With PSEG-LI setting about 4,000 poles a year, their impact on our environment is enormous. I hope that as the leader of Long Island’s utility company you will reconsider this new policy.”

For over a year Bosworth has been calling upon PSEG-LI to stop using penta on the poles and to consider using safer, non-toxic preservatives or composite poles. In September 2014, the Town of North Hempstead passed a law requiring poles treated with hazardous chemicals to be labeled with a warning. The law, which went into effect in March 2015, was challenged by PSEG, which filed a suit in federal court to stop it.

According to the Supervisor, even if PSEG changed all the poles to CCA poles, the town’s law calling for warning signs on all poles would still be applicable because the code is not specific to penta, but to “utility poles treated with a ‘hazardous chemical’”.

In March 2015 U.S. Senator Charles E. Schumer called on the U.S. Environmental Protection Agency (EPA) to immediately investigate the use of penta on utility poles throughout Long Island and urged PSEG Long Island to immediately suspend further use of this chemical until their federal study is complete. Schumer noted serious concern that treating the poles with such a toxic chemical could potentially cause health risks to utility workers, adults and children and could leach into ground water over the long-term as the poles deteriorate.