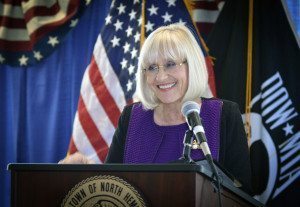 On an overcast Friday afternoon just days after the season’s worst snowstorm, Jonas, dumped more than two feet of snow on Long Island, Judi Bosworth, supervisor of the Town of North Hempstead (TONH), addressed the attendees of the League of Women Voters of Port Washington-Manhasset luncheon held at Harbor Links Golf Course in Port Washington. The room was packed with staff, government officials and supporters of the League of Women Voters to hear how the town was doing.

Bosworth’s opening remark made light of the fact that she always has to address the snow situation during her State of the Town Address. During her speech, she thanked the staff at the TONH 311 Call Center, who answered more than 3,500 calls around the clock during the blizzard. The center celebrated 10 years of service and has answered more than 1.4 million calls since its inception in November 2005. In 2015, the center answered 175,000 calls.

How does Bosworth get things done in North Hempstead? Very simply. “Our town board continues to function in a spirit of collaboration and bipartisanship with the best interest of our residents at heart and I know that our accomplishments and progress are the products of that spirit,” said Bosworth. This theme was prominent throughout her speech.

Bosworth spoke on winning the fight against casinos and drilling of aquifers by New York City. Work has been done on town roads, parks and facilities as well as on future projects. Clearly proud of the bipartisan effort for passing a fiscally sound budget of .73 percent under the mandated tax cap and earning a rating of Aaa from Moody’s, Bosworth is confident the town can face a zero percent tax cap next year—quite a challenge.

Extensive work will be done at North Hempstead Beach Park, including a new sewer system and a design and visioning firm of Quennell Rothschild, who will make it the premier recreational facility it can be. Initiatives, such as making areas more bike friendly, are also in progress.

Work is being done on the replacement of the culvert under the road in Leeds Pond and the Yes We Can Center, as well as Town Dock artwork design, stormwater mapping, a GIS mapping project of street structures in which villages can opt to participate in an environmental master plan.

Bosworth also called for the reopening of the Sixth Precinct to protect the citizens of the Town of North Hempstead, though she claims she has not received a response from county officials. The event concluded after a brief question and answer period.