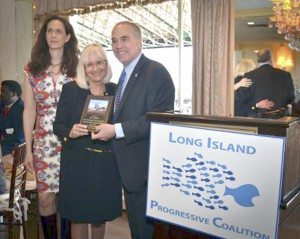 North Hempstead Town Supervisor Judi Bosworth was honored with the inaugural Diana Coleman Progressive Leadership Award at the Long Island Progressive Coalition’s (LIPC) 36th Annual Luncheon at Timber Point Country Club on April 11. New York State Comptroller Tom DiNapoli was on hand to present the award to Bosworth. The award was named for the late Diana Coleman, who was a cochair of the LIPC and a lifelong fighter for human rights and social justice.

“When Diana passed away on Jan. 10, 2015, she left an indelible mark on all who knew and loved her and on her community at large,” Bosworth said during her acceptance speech. “The grassroots issues that Diana was always out in front of were all important ones that reflect so many of the priorities that are near and dear to my heart, including enhancing human dignity, equal and fair representation for all, and economic, social and racial justice.”

The afternoon also featured recognition of several other “Long Islanders Who Have Made a Difference,” including Assemblywoman Michaelle Solages, Rev. Charles and Shirley Coverdale of the First Baptist Church of Riverhead, Tom Garry of Harris Beach, Kevin Harvey of IBEW Local 25, Jacob Dixon of Choice For All, and Dylan Skolnick of  Cinema Arts Centre.