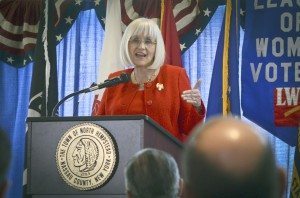 North Hempstead Town Supervisor Judi Bosworth delivered her second State of the Town address last week, focusing on improved service at the building department, visioning for the waterfront, a declaration to protect the area’s sole source aquifers from being tapped by New York City and a look back at 17 snowstorms.

She began with a fitting quote made by former North Hempstead Town Supervisor May Newburger 20 years ago.

“It’s hard to believe that when I stood before you last year at the beginning of my term as supervisor, we were all struggling with the worst winter in memory. Battling 17 snow storms is a rugged beginning…”

“I couldn’t resist sharing that line from May Newburger’s 1995 speech,” Bosworth said. “It mirrored exactly what I would say today after 13 months in office. Some things don’t change, even 20 years later.”

The supervisor spoke before a crowd of hundreds of local government officials, dignitaries and residents. The speech was part of a luncheon program hosted by the League of Women Voters of Port Washington-Manhasset, who have hosted this event for 30 years.

She delivered her speech before a backdrop of snow-covered hills and fairways at the Clubhouse at Harbor Links golf course, a fitting scene considering the multitude of snowstorms that have hit the town since she took office in January 2013.

Bosworth reviewed many of the accomplishments of her first year, as well as her specific goals and priorities for 2015 and beyond. Last January, Bosworth spoke about her priority of giving all residents “a seat at the table.”

This year she spoke about several community issues where resident input was so important, specifically the PSEG Long Island utility pole project in Port Washington, Great Neck and Manhasset. Bosworth said after finding out about the project early last year, “I pressed PSEG LI officials to come to the table and convinced them to conduct a public forum in this very room.”

She also spoke about the ongoing fight against the proposed casino in Westbury. She thanked residents for their feedback which culminated in the announcement yesterday that the town would file a lawsuit against the casino development in conjunction with the Town of Hempstead and the Village of Westbury.

One of the highlights of Bosworth’s 2014 speech was the announcement of the new applicant advocate position in the building department. This year, she announced some of the progress that has been seen as a result of this appointment and other efficiency enhancements.

“In 2014, the building department made significant strides to improve customer service and confidence, and modernize the way it does business. We have restructured and re-designed the Department down to its foundation,’ Bosworth said. She noted some of the accomplishments of the past year including setting up mobile office hours for residents and seniors, providing evening business hours, redesigning the department’s website, and now accepting credit card and debit card payments.

Fiscal strength for the present and long-term were also lauded by Bosworth as she spoke about the town’s accolades from independent financial agencies this year, as well as the plan for the future through the unanimously approved five-year capital plan.

“Perhaps our biggest accomplishment was unanimous, bi-partisan approval of the 2015 town budget, which I am proud to report is under the state tax cap and cuts expenses by $600,000,” she said. “The (capital) plan demonstrates a bi-partisan commitment to maintaining and improving the town’s roads, parks and facilities and maximizes grant funding sources.”

In a new announcement, Bosworth said that she will be meeting with officials from the New York City Department of Parks and Recreation next month regarding the town’s waterfront revitalization plans as she looks to develop ideas from what has already been accomplished there, most notably at the East River Waterfront Esplanade, which is an ongoing project that seeks to improve access to the waterfront and create waterfront amenities for public use and enjoyment, similar to what the town is exploring.

“We are working to develop a comprehensive vision for our Hempstead Harbor waterfront that could include dining facilities, a marina, tennis, paddleboard, jet ski rentals, an extended shoreline trail, improved rowing facilities and enhanced recreational opportunities for all residents,” she stated.

She also spoke about aquifer protection, which has been a hallmark of the supervisor’s career in public service. She outlined two water conservation goals in 2015 which includes pressing strongly to establish a state oversight and enforcement mechanism for Long Island’s water supply, and stopping the plan to re-open dozens of now-dormant wells in Queens.

“I am adamantly opposed to reactivating the Jamaica wells until a rigorous and impartial scientific study is performed,” she said.

As Bosworth finished her speech, she re-invoked the words of former Supervisor Newburger.

She said, “As tough as it sometimes was, this has been a wonderful and challenging job for me, and I hope to continue. There’s still so much to do, some of it tough, some of it easy, but all of it rewarding.”