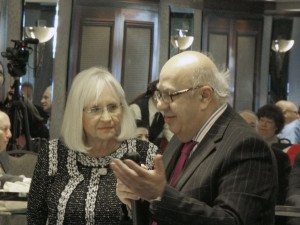 While the Great Neck Chamber of Commerce eagerly anticipates its 100th anniversary celebration next month, those who attended the Chamber’s luncheon last week heard from a very enthusiastic and supportive Town of North Hempstead Supervisor Judi Bosworth.

Bosworth is a longtime peninsula resident and her speech clearly demonstrated her admiration for her hometown and belief in Great Neck’s vibrancy and ability to thrive, despite the obstacles that today’s economic climate continue to present.

Opening the event, held in The Inn of Great Neck’s Empire Room, Chamber President Hooshang Nematzadeh commented on the continuing concerns over the number of vacant stores in the business districts on the peninsula.

“There are many reasons, of course,” he said in addressing the vacancy rate. “The most important one is that our brick and mortar stores are competing with Internet sales that have no overhead, don’t collect any (sales) taxes. It’s an unfair competition. Also, other factors are changes in demographics, purchasing habits and, of course, one area that’s really impacting is high taxes.”

Bosworth addressed the vacancy problem in her remarks saying, ”We’re making strides. We see things are turning around.”

“This is an administration that is very cognizant of the pressures that are on all of us and we are not reducing services,” she said in referring to the town’s recently passed budget. “What we are doing is trying to find ways of streamlining, doing things in different ways so that they can result in reductions of our town budget.”

Bosworth was quite emphatic about her feelings about Great Neck. “The experience that people get here is the same experience as people get when they go visit a Roosevelt Field or the Americana Mall…but places like Jildor Shoes, Gino’s Pizzeria, the Squire Movie Theater, Kensington Deli, the Gold Coast Arts Center…and the ever so recognizable landmark of the clock on the corner of Grace Avenue and Middle Neck Road, these are all part of our lives and distinctly say ‘Great Neck.’”

“We know what draws people to a downtown area,” she continued. “It’s offering a wide variety of things to do like great dining…shopping, arts, cultural recreation. It’s pedestrian friendly streets and sometimes it’s an unexplained energy that a downtown generates that makes everybody want to go there. And how fortunate we are that Great Neck has all of these things.”

With Plaza Mayor Jean Celender and Village of Great Neck Mayor Ralph Kreitzman looking on, Bosworth praised their villages’ events and street fairs. “These events contribute an intangible sense of community to Great Neck,” she said.

She also cited the Chamber, itself, and the Business Improvement District saying, “They’re working hard to keep our downtown vibrant.”

Bosworth reminded the audience of the scheduled opening of high-tech business incubator Launchpad Great Neck, next month. The project, a collaborative effort among the county, town and Plaza, is set to occupy space at 3 Grace Ave.

“Launchpad was created to help entrepreneurs improve the odds of startup success and build prosperous companies right here on Long Island,” she explained. “The developer has pledged that the incubator and other tenants will create 50 new jobs by the year 2016. That’s something for us to celebrate.”

The Chamber’s anniversary dinner is set for April 30 at Leonard’s Palazzo at 6:30 p.m.