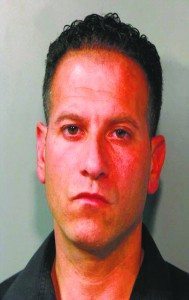 Joseph Borelli from Howard Beach, 42, was arraigned on a 21-count indictment for a string of commercial burglaries in Nassau between January and June 2015, in which he allegedly stole more than $200,000 in jewelry, cash and other items, according to Acting Nassau County District Attorney Madeline Singas.

Borelli was arraigned on 10 counts of third-degree burglary, 10 counts of second-degree criminal mischief and possession of burglar’s tools. The defendant was held on $450,000 cash or bond bail and is due back in court Jan. 5. He faces a maximum of three-and-a-half to seven years in prison on each top count.

Borelli is charged with conducting overnight “smash-and-grab” burglaries in jewelry stores, delis, a market and a shoe repair store throughout a span of six months in Great Neck, Merrick, Greenvale, East Norwich, New Cassel, Massapequa, Valley Stream, Syosset and Plainview. On Jan. 10, in Cookshop Deli at 374 Great Neck Rd., $500 cash and lottery tickets were stolen, and on May 25, in Bagelman of Great Neck at 491 Great Neck Rd., $200 was stolen.

The Acting DA said that officers in the NCPD 3rd Squad initially identified a burglary pattern and, working with the NCPD DA Squad and the NCDA Organized Crime and Rackets Bureau, assisted in a six-monthlong investigation, obtaining warrants and helping to track and arrest Borelli and his codefendants, Edan Balila and Rotem Balila, both from Great Neck. Video surveillance and court-authorized GPS tracking helped bring the arrests.

Codefendants Edan Balila and Rotem Balila both pleaded guilty to one count of third-degree burglary and are awaiting sentencing.