St. Patrick’s Day is on its way. To me, no food is as unappetizing as a green bagel, except for a cupcake with green gooey icing covered in green sprinkles and a plastic leprechaun sitting on top. But, I’m a sport and like to support my neighborhood merchants. I close my eyes and open my mouth so I don’t see the bile green color.

For me, another unfortunate food choice is Irish soda bread, which lands in my stomach like a hockey puck and weighs me down for the rest of the day. Then, there is blood sausage, an Irish delight, which is usually served at pubs for breakfast. The sausage is rather tasty if I don’t think about what I’m eating.

But, as far as I’m concerned, the best of Irish cuisine is corned beef and cabbage. It’s nice and greasy, with the cabbage and potatoes cooked in the same water. And, it’s especially tasty with horseradish sauce on the side. Irish stew comes in second, if you know how to cook it—thick and loaded with vegetables. Third is shepherd’s pie well-prepared by a red-nose cook in an Irish pub.

A popular import from the emerald isle is the cherished hand-knit sweater. But, I find these all-wool beauties itchy and they often feel like a stand-in for sandpaper. Plus, the weight of the garment can cause heatstroke, not to mention sagging shoulders.

Also qualifying as Irish tradition are the clog performers led by Michael Flatley and his step dancers. The sound of these heavy shoes hitting the hard surface of the stage produce a sound not unlike a sledge hammer breaking up concrete. Five minutes of this racket sends me running for the hills. If I must experience this form of entertainment, the Irish Jig is always a much better choice. 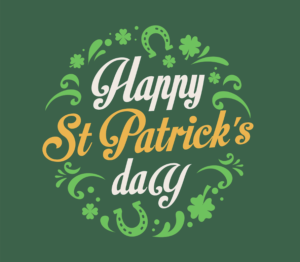 Despite certain aspects not being my favorite, St. Patrick’s Day is a jolly holiday with lots of drinking in pubs. A nice cold beer or Baileys Irish Cream will certainly lighten the mood. Surely, we all need a little cheering up these days with all the dark news permeating the media. Spend the day sitting in a pub drinking Irish coffee; listen to some blarney from the guy on the stool next to you—that should do the trick. After an hour or so, you will deny every unpleasant thought disturbing your peace of mind. You will have veiled the subjects weighing on your brain and have a jolly good time. Hopefully, your new companion won’t fall off the stool laughing at his own jokes.

However, there could be one fly in the ointment. What if the new President decides to march in the St. Paddy’s Day parade? He might decide to add some ballast to his presidency. Irish votes would do the trick and cover his bases. The trouble with this scenario is that it might interrupt the bliss with a riot. All the good feelings would vanish. I can envision a barrage of ripe green tomatoes landing on his orange hairdo. What a mess! That would  surely change the subject from some of the shenanigans going on in his administration.

The possibility of this happening is getting off the track. I would rather be optimistic and predict a happy holiday for all who choose to celebrate with good cheer. I’m going to the market today to get my perfect ready-to-cook corned beef. For dessert, I’ll have green soda bread—with raisins to soften the blow to my digestion—washed down with Irish coffee. Leprechauns will make mischief as the happy celebrants march down Fifth Avenue. With the luck of the Irish—no Trump in sight.