A member of the NYRR, Berman has run the Five-Borough Series for close to 20 years. The races used to consist of a half marathon in each of the five boroughs, but have since been compressed and now include five races of varying lengths. 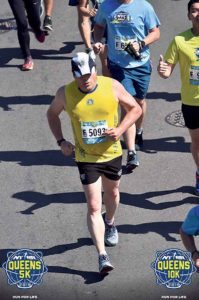 “A portion of the money raised goes to fund a program that gets young New York City school children off their duffs and into a competitive running program sponsored by NYRR,” said Berman.