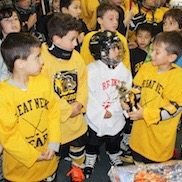 The Bears Hockey program celebrated the end of a great season at the Andrew Stergiopoulos Ice Rink on Friday, May 1. Awards Night included approximately 100 participants, ages 5 through 12, who received trophies to celebrate their successful season. Commissioners Robert A. Lincoln, Jr., Daniel M. Nachmanoff and Frank S. Cilluffo attended (and handed out the trophies), along with Superintendent Peter Renick, Hockey Director Dan Marsella and all of the participating coaches. Nick Mavriomichalis, father of one of last year’s Bear Hockey members, Dimitri, who has since moved on from the program, generously brought food for the celebration with other parents offering desserts and beverages. The hockey team received their awards and some players and parents were lucky enough to win a raffle prize. Raffle prizes included signed NY Islander hockey pucks, drinking mugs, yearbooks, blankets, autographed pictures and T-shirts.

It was an enjoyable night for all involved! 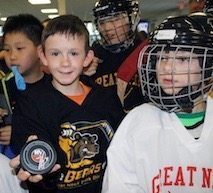