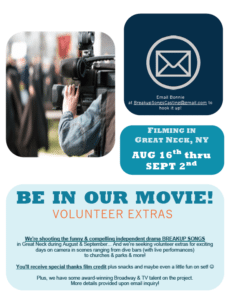 Volunteer extras are being sought for the indie feature Breakup Songs being filmed in Great Neck through Sept. 2—and they’re extending the opportunity to local residents.

The dark musical comedy drama, which is being directed and produced by Liz Rohrbaugh and Dan Powell (Inside Amy Schumer), stars Lena Hall, the award-winning Broadway actress from Kinky Boots and Hedwig & the Angry Inch.

Breakup Songs begins after an emotional breakup from her girlfriend, when Becks returns to her hometown of St. Louis where she struggles to reconnect with her troubled family while navigating a surprising new romance and musical exploits.

Extras must be non-union only. The work is unpaid, though snacks, meals and special thanks credit will be provided.