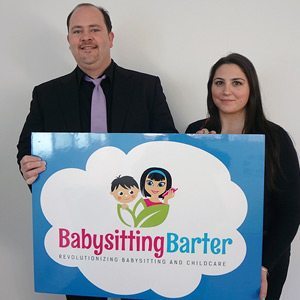 The reservations are set, the film time picked out, everything looks to be set for date night…except the kids, that is. You forgot to hire a sitter? You thought I was doing it? Dinner is at eight, whatever are we to do?

All too often, families run into this situation, and all too often it spells trouble. But one man is seeking to remedy that with the Feb. 10 launch of BabysittingBarter.com, where parents can easily find the solution to date night woes, according to President and CEO Brian Mannix. The site currently operates out of LaunchPad LI in Mineola, an office building that specializes in catering to startup operations.

“We are a unique online platform that brings parents and babysitter together,” he said.

Mannix was born in Garden City, and after completing college in Pennsylvania, he returned to Long Island, living in Rockville Centre, Sea Cliff, and finally Glen Cove, where he currently resides. While he has been a social studies and computer teacher for the past 14 years in the Great Neck School District, his latest undertaking was inspired by the fact that he has three children; obviously, he said, this can complicate things when he and his wife desire the occasional night out on the town.

“I have three boys…they’re great, but they’re tough,” he said. “One night back when we were living in Sea Cliff, everyone was going to a theater event in town. One woman whom I worked with wasn’t able to go because she couldn’t get a babysitter…everyone in town had hired them all. In my mind, I thought that perhaps she should be the sacrificial lamb and baby-sit for everyone’s kids, and next time I would do it, and so on…and that’s how Babysitter Barter was born.”

The idea of babysitting cooperatives was formed—a website where parents can “trade” babysitting for free. Mannix constructed a website where parents hoping for a night out can send an email to the people in their circle; if one of them agrees to sit for their kids, the parents pay them in “points.” The more points you have, the more often you can request the services of those in your circle, and if your points are getting low…well, you need to get out there and start sitting for people yourself, buddy.

Gaining the support of Mom’s Clubs across the country, Mannix saw that he was onto something. With the help of his business partner, Lauren Conlon, he started to take Babysitting Barter to the next level.

“At some point, your circle might not be able to sit for you on a given night, so we thought, ‘why not bring in a paid babysitter crew?’ That could be our paid, premium component, whereas the point system among parents would remain free,” he said. “We’re here to make money, but we’re really here to do so much more than that…we want to benefit parents. If they don’t have the money for babysitting, we want them to be able to use our site anyway just to be able to schedule and trade babysitting with their family and friends.”

The services of paid babysitters are scheduled via “gold points” that can be purchased by users; the sitters themselves are screened by a comprehensive process (known as “trustworthy ties”) where members can see who has employed who, inquire about experiences with specific sitters, and leave detailed reviews. In addition, the sitters can accumulate gold points themselves (known as a “barter bonus”) based on the number of jobs they work, that can be traded in for cash, gift cards, or coupons for local businesses.

“We want parents to feel confident that they can get a good, trustworthy, reliable, and qualified babysitter with BabysittingBarter.com,” he said. “Likewise, we want to reward babysitters for being loyal and to be connected with us.”

Local businesses can get in on the act by advertising upcoming events (at no cost), thus opening up the services of sitters affiliated with the site to cover families wishing to attend that event.

According to Communications Director and Manhasset resident Michelle Pagan it’s a valuable resource for both parents and babysitters; a genuine sentiment she said comes from experience.

“I was a babysitter for over 10 years, and this is definitely something unique and new in the babysitting realm. It’s nice to have a website where sitters can form trustworthy connections with parents and add a little extra to their bank accounts,” she said. “Even though I’m now retired as a sitter, I wish something like this was around when I was sitting, because it’s a great idea.”

Mannix said the site is there to be a valuable service to the community; with the launch fast approaching, he hopes that his site will take off across the nation, bringing parents, sitters, and local merchants together for the greater good of them all.