By Sheri ArbitalJacoby and Elizabeth Johnson 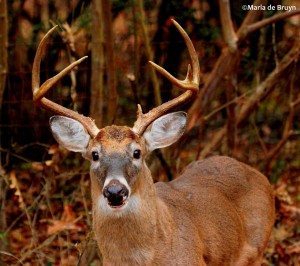 Before school one morning last week, a deer crashed into a window at the E.M. Baker School, broke the window, browsed through a classroom and exited the same way it entered before students or teachers arrived, according to multiple accounts. Officials at the school declined comment.

This is not the first time that deer have been spotted in Great Neck. In May 2010, a deer was discovered wandering along North Station Road in Great Neck Plaza, according to Wendy Kreitzman, longtime Great Neck Record editor. “Oddly enough, the deer was caught apparently attempting to enter a bank.”

Over the past year or two, deer have been spotted in Saddle Rock, Kensington, Russell Gardens, University Garden and Kings Point, said Kreitzman. At the time, there was speculation that the deer could have swam across from Westchester or City Island, as deer are reportedly strong swimmers. According to the Department of Environmental Conservation (DEC), “Deer can swim, run up to 35 to 40 miles per hour and jump over an eight-foot high fence.” And the U.S. Fish and Wildlife Service, a bureau of the federal government under the Department of Interior, told the Great Neck Record that there was a small herd of white-tailed deer in the wooded area across from Alley Pond.

Prior to the incident at the Baker School, Anthony Sabino, a longtime Munsey Park resident, spotted a deer on Shelter Rock Road while traveling home on Tuesday, Nov. 3. The animal ran across the road and was nearly struck by oncoming traffic in the vicinity of the Hamlet.

The Manhasset Neighborhood Watch Facebook page indicated several deer sightings due to the sidewalk replacement construction at Christopher Morley Park and reached out to Nassau County officials requesting installation of a temporary fence at Christopher Morley, which stated, “Due to the sidewalk construction occurring and lack of barrier adjacent to the golf course, the deer are roaming onto Searingtown Road and residential areas.”

Last week, Cara Sheridan O’Donnell, chief administrator at the Science Museum of Long Island in Manhasset said, “We had a report of a dead adult deer on the Science Museum’s beachfront just about 10 days ago. By the time we could investigate, the tide had apparently washed the poor animal away.”

According to Bill Fonda from the DEC, deer have been moving west into more populated areas—from Nassau County to Queens. Deer propagate quickly and proliferate the area. “The deer population on Long Island is estimated to be between 25,000 to 35,000 and has experienced a steady increase in both the number of deer and spatial distribution since the 1980s.”

Nassau and Queens counties prohibit deer hunting due to the proximity of residential housing. Deer hunting is only available on Long Island in Suffolk County on New York State managed lands.

The most dangerous thing about these creatures is that they’re known to cause car accidents. To prevent deer-vehicle collisions, the DEC strongly advises motorists to take the following precautions:

• Use extreme caution when driving at dawn or dusk, especially from late fall through December and when visibility is poor.

• Slow down when approaching deer standing near the roadside as they may bolt at the last minute when a car comes closer, often sprinting onto the road.

• If you see a deer cross the road, be alert for others that may follow.

• Use flashers or a headlight signal to warn other drivers when you spot deer near the road.

For motorists who have the misfortune of hitting and killing a deer with their vehicle, the New York State Environmental Conservation Law allows for the motorist to keep the deer, but a special permit must be obtained from the investigating officer at the scene of the accident. Motorists should not remove a deer unless a permit is obtained first.

Residents should be mindful of the presence of deer in the area and use caution.