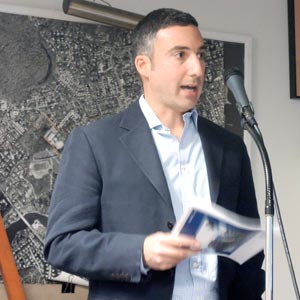 The Village of Great Neck is moving forward as they consider a luxury apartment complex, Avalon Bay, for a waterfront piece of property on East Shore Road, property that now contains old, unused oil tanks. The property lies between the Great Neck Water Pollution Control District’s sewer plant and the BMW auto repair facility. For anything to be built on this environmentally polluted site, the property will have to be cleaned to the high residential standards prescribed by the New York State Department of Environmental Control.

For the village to grant a permit for Avalon Bay, zoning changes would have to be made and so at this point, the village is holding hearings to determine whether or not to approve such a zoning change.

The village has applied for lead agency status in this project but has yet to hear from the Nassau County Planning Commission. The commission has 30 days to approve the application, deny it, or leave it to local determination. Should the commission deny the application, the village board could override that with a majority-plus-one vote.

While a public hearing was held last Tuesday evening, Dec. 3, the hearing mainly addressed zoning changes that would be necessary to build the 191-apartment complex which would include one-, two- and-three-bedroom units. Avalon Bay builds such complexes throughout the country, including several on Long Island, some of which required environmental remediation.

This proposed complex would not be built any higher than the current old oil tanks. The buildings would include four-story buildings, with two levels of parking below ground. A club room, a gym and outdoor entertainment areas with a swimming pool would also be included.

At the hearing, attorneys and representatives from Avalon Bay emphasized the benefits of both providing residences in the area, but also the prospect of cleaning up this heavily polluted, now-unused piece of property. Longtime resident Stuart Feigenblatt questioned the possibility of Avalon Bay receiving “tax breaks” along the way. Mayor Ralph Kreitzman admitted that tax breaks were a possibility, but that Avalon Bay would still be paying taxes, tax payments that would increase over time. Besides, the mayor added that the pluses would outweigh the minuses, as the developer will not build “if they don’t make money.” And he added that this almost four-acre piece of property has lain “fallow” for almost 10 years and this was an opportunity to not only build more housing, but to finally clean up the site. However, the mayor did say that the village would try to “extract” as much money as they can and he said that the clean-up of this “eyesore: and the money the village would receive, would far outweigh the chance that this polluted property could remain untouched, and polluted, for another “10 or 20 years.”

If approved, the complex would also be required to set aside 10 percent of the apartments for workforce housing. The village had put into law such a requirement years ago and eventually this requirement was superseded by New York State law.

The hearing was adjourned until Tuesday evening, Dec. 17.