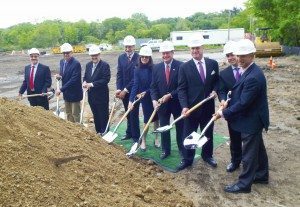 Hard hats and muddy shoes were the fashionable accessories of the day as officials from Nassau, the Town of North Hempstead and the Village of Great Neck gathered last week at the old Commander Oil site on East Shore Road for the 191-unit AvalonBay luxury apartment project’s groundbreaking ceremonies.

Several days of rain had turned the waterfront site (where six unused oil tanks once stood) into a hard-to-maneuver surface, yet those in attendance were in an upbeat mood and readily exchanged congratulations on the symbolic start of construction.

Especially pleased were the old Village’s Mayor Ralph Kreitzman and trustees Jeffrey Bass, Mitch Beckerman and Barton Sobel who first heard AvalonBay management’s request for approval a little over two years ago in May of 2013.

Kreitzman enthusiastically welcomed the guests and praised Avalon’s leadership saying, “Their plan to revitalize Great Neck’s Manhasset Bay waterfront is a great project, which contributes to the quality of life that is deserving of
our residents.”

“It’s a magnificent project,” added Bass. “It brings a level of vitality to the village. It’s also going to bring in some very significant tax revenue. It will create a significant number of construction jobs and will support a nice number of permanent jobs.”

Speaking of the project, Nicholas Terzulli, Nassau County’s director of business development said, “This is a testament to the public and private sector working together. The net tax benefit…is going to be plus $8 million. The project will create over 315 full-time construction jobs.”

“The total economic activity that this project will create is over $55 million,” he added. “Money will be spent and generated in this community. This is something that benefits everybody.”

As part of the agreement of sale of the property to Avalon, developer of close to 300 communities across the country, the Shapiro family, owner of Commander, agreed to take complete responsibility for the site’s cleanup, which is under strict New York State Department of Conservation monitoring.

At present, the cleanup almost 80 percent completed and should be finished during the summer.

Twenty of the one-, two- and three-bedroom units are mandated to be affordable workforce housing.

The buildings will be four stories high, with two levels of parking below ground. A clubroom, a gym and outdoor entertainment areas with a swimming pool will also be included.

It is estimated that completion will take at least two years though Avalon’s website promises occupancy in 2016. “I’m hoping that it’s a little faster than two years,” said Matt Whalen, Avalon’s senior vice president. “We’re going to try and beat two years and I will guarantee you that…it will be an absolutely remarkably beautiful waterfront community that the village, Avalon and the Shapiro family will be very proud of.”

Len Shapiro and his sister, Carol Engel, represented the Commander ownership. “Ten years ago my father had a vision,” he commented. “It was his wish to see this. Unfortunately he’s not here to see this.” Joe Shapiro died in January of last year.