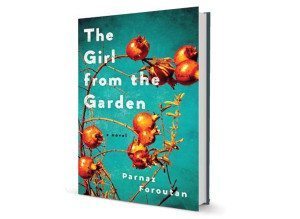 Author Parnaz Foroutan made her literary debut with last year’s The Girl from the Garden, and will be visiting the Great Neck Library to talk about and sign copies on Wednesday, May 4, at 7:30 p.m. at the Station Branch, The Gardens at Great Neck Plaza, 26 Great Neck Rd., second level, above Best Market.

The Girl from the Garden is an absorbing novel about desire, obsession, power and vulnerability, in which a crisis of inheritance leads to the downfall of a wealthy family of Persian Jews in early 20th-century Iran. Inspired by events in the author’s own family, the story is an exploration of sacrifice, betrayal and the indelible legacy of the families that forge us. For all his wealth and success, Asher Malacouti—the head of a prosperous Jewish family—cannot have the one thing he desires above all: a male son. His young wife, Rakhel, is made desperate by her failure to conceive a child. She is trapped in an oppressive marriage at a time when a woman’s worth is measured by her fertility, and deep-rooted cultural traditions prevail. Asher makes a fateful choice that will shatter the household. Witnessed through the memories of the family’s only surviving daughter, now an elderly woman living in Los Angeles, The Girl from the Garden unfolds the complex, tragic history of her family in a long-lost Iran of generations past.

Foroutan was born in Iran, where she spent her early childhood. She received PEN USA’s Emerging Voices fellowship for this novel, has been named to the Hedgebrook fellowship and residency, and received funding from the Elizabeth George Foundation, among other institutions. Foroutan will read from her novel, discuss her writing and personal experiences, answer questions from the audience and sign copies of her book, which will be available.