Author Noah Lederman will discuss his memoir, A World Erased: A Grandson’s Search for His Family’s Holocaust Secrets, on Sunday, Jan. 22, at 2 p.m. in the Community Room of the Great Neck Library, 159 Bayview Ave. 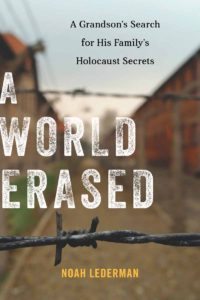 The poignant novel written by Lederman, the grandson of Holocaust survivors, transports readers from his grandparents’ kitchen table in Brooklyn to World War II Poland. Together, Lederman and his grandmother explore the memories that she had buried for decades—memories of Auschwitz and a half-dozen other camps, the Warsaw Ghetto Uprising and the displaced persons camps. Lederman was left with the stories—the ones that had been hidden, the ones that offered catharsis, the ones that gave a second hero, the ones that resurrected a family, the ones that survived even death. Their shared journey profoundly illuminates the transformative power of never forgetting.