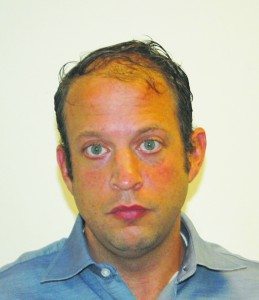 Daniel Spitalnic, an attorney with an office in Great Neck, was arrested at his home by DA investigators for stealing more than $470,000 by purloining a down payment from a couple selling their home and by fraudulently taking out a loan by falsely representing himself as a part owner of a corporation owned by his former mother-in-law, according to Acting Nassau County District Attorney Madeline Singas.

The 38-year-old attorney from Whitestone, admitted to the bar in 2003, was arraigned on two separate cases. Spitalnic is charged with three counts of second-degree grand larceny, one count of second-degree criminal possession of a forged instrument and one count of first-degree offering a false instrument for filing. If convicted on the top count, he faces up to 5 to 15 years in prison. Bail for the two cases was set at $30,000 bond or cash. According to the Nassau County District Attorney’s office, the case is still open, and the defendant is due back in court on Jan. 8.

“This attorney allegedly enriched himself at the expense of his clients and mortgaged a property that belonged to his former mother-in-law’s corporation,” Acting DA Singas said. “Stealing is wrong, but for an attorney to allegedly defraud a former family member and client is particularly troubling.”

Singas said that Spitalnic applied for and obtained a $300,000 loan in March of this year by falsely representing himself as the part owner and officer of a corporation solely owned by his former mother-in-law. The loan was secured by mortgage on a commercial property in Great Neck, and the defendant allegedly used the money on personal items such as rent, travel, entertainment, food and other expenses.

Spitlanic’s former mother-in-law became aware of suspicious activity in May when she went to pay real estate taxes and learned that the taxes were already paid by a title company. She confronted the defendant, who said he took out the mortgage because he owed money and told her that she would be paid back. Spitalnic then gave the woman a Satisfaction of Mortgage document that claimed that the loan had been satisfied. The document, however, which was filed with the Nassau County Clerk’s Office in May, was a forgery.

In the second case, the defendant represented a family that was selling a home in Manhasset. A purchaser paid a down payment by check in June in the amount of $171,500, which was to be held in escrow by Spitalnic pending the closing. The closing on the property was held on Sept. 8, but the escrow money—minus $7,460 due to a title insurance company—was never received by the sellers. The check issued by Spitalnic to the title insurance company in the amount of $7,460 did not clear due to insufficient funds in the escrow account.