About 200 residents and elected officials cheered as Assemblyman Anthony D’Urso was sworn in at a ceremony at Clinton G. Martin Park in New Hyde Park. The park is part of the Town of North Hempstead where D’Urso served as a councilman for 14 years.

D’Urso, the new assemblyman from the 16th Assembly District, was elected in November to fill the seat of former Assemblywoman Michelle Schimel, who did not seek reelection. Schimel administered the oath of office. 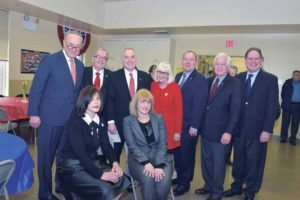 Throughout the ceremony, moderated by North Hempstead Democratic Chairman John Ryan, politicians spoke about D’Urso’s passion and humanitarianism in the community and abroad in third-world countries, where he has made 36 trips at his own expense. The Albertson VFW Post 5253 was on hand, serving as color guard and with Commander Jack Hirsch leading the Pledge of Allegiance. The National Anthem was sung by Lisa Berman. Rabbi Robert Widom of Temple Emanuel of Great Neck performed the invocation and Fr. Irinel Racos of St. Elizabeth of Hungary recited the benediction.

Addressing the crowd after the swearing in, D’Urso promised that he will proudly carry on the impressive legacy of May Newburger, DiNapoli and Schimel while blazing his own trail.

“During the 240th legislative session, I am looking forward to digging into serious issues our communities are facing and working on long-term solutions,” said D’Urso.

Thanking his family, especially his wife of 51 years, Maria, whom he described as his “secret weapon,” D’Urso credited his family with giving him confidence and raising him up “every step of the way.”

The inaugural ceremony of New York State Assemblyman Anthony D’Urso will air on PATV channels 20 on Optimum and 37 on Verizon Fios on Tuesdays at 8:30 p.m. and Thursdays at 8 p.m., and stream at www.patv.org/livestream.