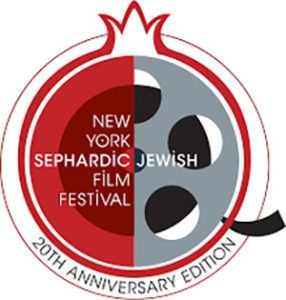 The American Sephardi Federation (ASF) will be holding its 20th Anniversary Edition, weeklong celebration of diverse stories and rich histories portrayed in film at the New York Sephardic Jewish Film Festival (NYSJFF). The ASF, based at the Center for Jewish History, preserves and promotes the history, traditions and rich mosaic culture of Greater Sephardic communities as an integral part of the Jewish experience. The festival features a different themed program each day, with select nights dedicated to the Moroccan, Iraqi, Greek and Yemenite Jewish communities.

For the first time at the festival, the untold stories of how Sephardic Jews from Algeria, Tunisia and Greece suffered during the Holocaust will be shared during a full day of films with Sephardim in the Shoah on Sunday, April 2.

The program From Ethiopia to Israel on Tuesday, April 4, will explore the challenges of emigration.

An Evening of Empowering Sephardi Women on Monday, April 3, showcases three films that explore women’s experiences and highlight differences in gender relations and expectations between Ashkenazi and Sephardi communities. ASF’s Young Leadership Board is hosting Love, Sephardi Style on Tuesday, April 4, an evening of short films that explore modern romance and relationships from several Sephardi perspectives, including Israeli and Persian. An interactive discussion will follow with an award-winning Jewish Iranian-American filmmaker.

“For this important NYSJFF 20th Anniversary Edition, we are proud to present poignant and powerful programs that speak to the issues of our time and all time,” said Sara Nodjoumi, artistic director of the New York Sephardic Jewish Film Festival.

Nodjoumi produced The Iran Job and is a programming alumna of the Tribeca Film Festival. “There are stories of immigration, persecution and resistance. Perspectives on everything from the making of the modern Middle East to the modern experiences of finding romance in traditional Sephardi communities. The number of quality films this year is a sign of vitality and the increasing interest in the varied experiences of Sephardim,” said Nodjoumi.

“Sara has scoured the globe for movies of Sephardi interest and the results are the strongest film line-up in the NYSJFF’s storied history,” said Jason Guberman-P., ASF’s executive director.

Joining her as the NYSJFF’s producer is French opera singer David Serero, who previously created and starred in ASF’s successful theatrical season in Merchant of Venice, Othello and Nabucco. Most recently he performed at ASF for the president of Portugal.

“We are elated that David is applying his many talents to make this NYSJFF the most memorable yet,” said Guberman.

The festival will screen all films and events at ASF’s home, the Center for Jewish History at 15 W. 16th St., near Union Square in Chelsea. For a list of selected NYSJFF films with dates, times and ticket information, see below or visit www.nysephardifilmfestival.org.

A reception will be held at 7 p.m., followed by the Pomegranate Award Ceremony.

At 8:30 p.m., Letters from Baghdad, directed by Sabine Krayenbühl and Zeva Oelbaum, will be screened. This is the story of a true original—Gertrude Bell—sometimes called the female Lawrence of Arabia. A British spy, explorer and political powerhouse, Bell played a pivotal role in the creation of Iraq. Voiced and executive produced by the Academy-Award Winner Tilda Swinton and featuring newly discovered primary source documentation and rare footage, the film unveils this dramatic story of the modern Middle East. Filmmakers will be in attendance for Q&As.

Sunday, April 2: Sephardim in the Shoah

The Night of Fools

At 2 p.m., The Night of Fools, directed by Rami Kimchi, will reveal the little-known story of Algeria’s mostly Jewish underground movement during WWII. With only 400 volunteers versus the Vichy garrison of 25,000 troops, the underground succeeded in taking control of Algiers for one night, before handing the city over to the Americans, who arrived via an amphibious landing the next morning.

At 4 p.m., Victor Young Perez, directed by Jacques Ouaniche, tells the heartbreaking true story of Victor “Young” Perez, a Tunisian Jew and the World Flyweight Champion in 1931 and 1932, who was deported to Auschwitz.

At 6:30 p.m., Cloudy Sunday, directed by Manoussos Manoussakis, is set in Thessaloniki (Salonica) during the Nazi occupation in 1943. This film tells the story of the forbidden love between Estrea, a young Jewish woman, and Giorgos, the brother-in-law of the famed composer Vassilis Tsitsanis.

At 5 p.m., Dimona Twist, directed by Michael Aviad, will be screened. Like most of Israel’s southern periphery, Dimona was a town created for primarily Middle Eastern Jewish immigrants and refugees. Seven courageous Sephardi women share their stories about being shipped to this desert town, originally built in the 1950s. Determined to create meaningful lives, they found creative ways to overcome poverty and discrimination.

At 7 p.m., The Women’s Balcony, directed by Emil Ben-Shimon, will show when a women’s balcony collapses during a bar mitzvah, a close-knit Sephardic congregation in Jerusalem fractures along gender lines. This popular crowd pleaser about women speaking truth to patriarchal power is accompanied by stirring music and sumptuous food.

The feature will be preceded by the world premiere of A Gravedigger’s Daughter, directed by Shira Gabay, a 15 min. short film from Israel.

Tuesday, April 4: From Ethiopia to Israel

At 5 p.m., Red Leaves, directed by Bazi Gete, will tell the story of Meseganio Tadela, 74, an obstinate man who emigrated from Ethiopia to Israel 28 years ago with his family. After losing his wife, Meseganio sets out on a journey that leads him through his children’s homes, realizing that he belongs to a rapidly disappearing class that believes in retaining Ethiopian-Jewish culture.

At 7 p.m., Dear God, directed by Erez Tadmor and Guy Nattiv, about Aaron, a simple man who guards the Wailing Wall, will be shown. Day after day, a mysterious woman puts a note in between the ancient stones, and Aaron, recovering and reading the papers, fulfills her deepest wish.

At 7:15 p.m., Jewish Blind Date, directed by Anaëlle Morf, a short narrative, will be screened. Unhappy in love, Mary Lou decides to reconnect with her religious roots by marrying an observant Jew. In order to get married, she has to pass the Shidduch Test, which will determine whether her life will be a success or failure.

At 8 p.m., Love, Iranian-American Style, will be shown. Directed by Tanaz Eshaghian, the film is about sexual purity, money and a mother’s worries coming together in this humorous guided tour of America’s status-obsessed Iranian-Jewish community. As Tanaz’s Iranian family attempts to marry her off now that she’s reached the age of 25, she vacillates between soppy American ideas of romance and a more business-like Persian approach, and in the end may be unable to execute either. The filmmaker will be in attendance for Q&As.

Trezoros: The Lost Jews of Kastoria

At 6 p.m., Trezoros: The Lost Jews of Kastoria, directed by Lawrence Russo and Larry Confino, uses never-before-seen archival footage for a moving documentary set in the idyllic city of Kastoria, illuminating the lives of the Greek Sephardic community until Nazis took control of the town—dooming the substantial and storied community that had existed since the times of the Roman Empire. The filmmakers will be in attendance for Q&As.

The Queen of Rebetiko: My Sweet Canary

At 8 p.m., The Queen of Rebetiko: My Sweet Canary, directed by Roy Sher, will protray the story of three young musicians from Greece, Turkey and Israel who embark on a musical journey to tell the story of Greece’s best-known and best-loved Rebetiko singer, Roza Eskenazi, a woman who sang the way she lived: with passion, fire and love.

At 7 p.m., Sallah Shabati, directed by Ephraim Kishon, is a sharp, often hilarious satire that became the most successful film in Israeli history. The film is about new immigrants Sallah and his family who are left in a shack near their promised apartment and are abandoned for months. This 1964 classic won a Golden Globe Award and was nominated for an Academy Award for Best Foreign Film, putting Israel on the international film stage for the first time.

—Submitted by the American Sephardi Federation