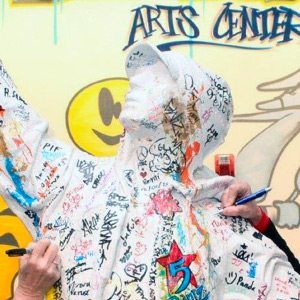 The Great Neck Arts Center officially changed its name last week to The Gold Coast Arts Center, formalizing a partnership with the Town of North Hempstead.

Under the agreement, approved by the Town Board and The Arts Center’s Board of Directors and Executive Committee, the Town is issuing a 20-year $850,000 bond to purchase the building occupied by The Arts Center at 113 Middle Neck Road in Great Neck Plaza. The town also will provide custodial maintenance, capital improvements and various services. The Town’s purchase of the 10,000-square-foot facility in the center of the area’s business district is, Arts Center officials say, one-third of the facility’s actual value. The newly renamed Arts Center will lease the property for $1 per year for 30 years, with the agreement subject to reevaluation every 30 years.

“This is the spirit of what the Town could and should be,” said Town Supervisor Jui Bosworth said at the renaming ceremony. “The potential for the arts in our lives will make us all sing.”

“The agreement frees up funds so that The Arts Center can concentrate on its core mission, which is to promote and support the arts through education and exhibition,” said Arts Center Executive Director Regina Gil, who pointed out that the new Gold Coast Arts Center will coordinate arts programming throughout the Town. “Working in tandem with existing arts groups, we will foster collegiality between Town arts entities.”

In addition, the Town created the Town of North Hempstead Arts Commission and named Gil its chair.

“We will create a coalition of arts organizations to work together to benefit all of the residents of the Town,” Gil said. “Among other things, we can apply for grants together and coordinate arts programming.”

The Arts Center agreement took shape after Gil, feeling the strain of funding cutbacks, told elected officials of The Arts Center’s plight. She brought former Town Supervisor Jon Kaiman to a meeting with Carnegie Hall officials to discuss the Manhattan facility’s relationship with New York City. The City owns the concert hall and leases it to the non-profit in an arrangement not unlike the one crafted between The Arts Center and the Town.

“With this new agreement, we plan to continue to develop and grow,” Gil said. “We are delighted that Supervisor Bosworth is in a position where she can continue the work that Jon Kaiman started. This will lead to an outstanding collaboration. I see it as a validation of the good work The Arts Center has done for the past 20 years.”

“The proliferation of arts and film in our Town is so important,” said Bosworth, “as it boosts the local economy and enhances the culture and diversity of the Town of North Hempstead.”