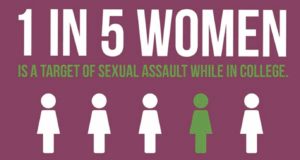 One in five women in college experience sexual assault. Studies show that students are at the highest risk of sexual assault in the first few months of their first and second semesters in college.

Last semester, news came out that George Washington University was mishandling sexual assault cases. The university didn’t communicate with an alumna when she asked for updates on her sexual assault case and created a hostile culture for survivors by failing to comply with disciplinary standards.

Aniqa Raihan, a sexual assault survivor who graduated last academic year, said that because they gave her assailant a lesser penalty than recommended by the student code of conduct, she didn’t feel like she had adequate support on campus. She alleges that because GW did not expel her assailant and declined to issue a no-contact order to him, she was continually at risk of sexual harassment.

It is underrated how often females are sexually assaulted on college campuses. The incidents usually involve the use of drugs and alcohol, and most victims are assaulted by someone they know due to the frequency that they’re using drugs and alcohol.

Victims aren’t coming forward for many reasons. They’re scared that colleges will disregard their claims, since the colleges are afraid of developing a bad reputation. If it comes out that there’s sexual assault on campus, the colleges will lose a lot of applicants.

Females also often don’t come forward when the assaulter is somebody they know. They don’t want to complicate their relationship with this person. They tend to blame themselves and downplay the assault. They tell themselves, “it wasn’t a big deal.” It’s hard for them to come to terms with the fact that they have been sexually violated.

We live in a world where women are encouraged to come forward. Times are changing and men aren’t getting away with the same things they used to. It’s not that “what’s acceptable has changed,” because rape and sexual harassment have never been acceptable. They’ve just been accepted because women didn’t have an equal say in societal norms.

It’s time for colleges to get with the times and improve the prevention programs provided to their students. They aren’t working. Too many females are being assaulted and harassed, as proven by the statistics.

Being a female in college, I see what happens to the victims, and I couldn’t imagine what I would do if it happened to me.

There are definitely steps colleges should be taking to minimize assaults. They need to be providing better bystander intervention programs. Students need to develop the awareness, skills and courage to intervene when another individual needs help.

Most of the time, the assaults start in a public setting, such as a party. If other students can sense that there’s something wrong, maybe it could reduce the assaults.

The victims themselves also need to be more educated on what constitutes sexual assault. A lot of the time, they don’t even realize they are being sexually violated, until it is too late.

There are a lot of rape myths that cause confusion among college students. Females often blame themselves and convince themselves that they were assaulted because of “the way they were dressed” or “the way they carried themselves.” Common rape myths among men are “it’s not sexual assault because she isn’t physically resisting me or fighting back.”

There needs to be more mandatory educational courses on campuses that go into depth on what constitutes sexual assault, what you should do if you see inappropriate behavior that raises a red flag and, of course, what to do if you’re in the situation and how to get out of it.

Chelsea Namdar is a student at New York University who graduated from North Shore Hebrew Academy Class of 2017.