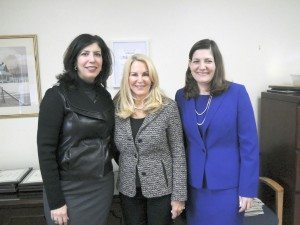 Acting Nassau County DA Madeline Singas recently visited the Great Neck Record office in Mineola for a roundtable discussion about her agenda. The focus of the conversation was on the plans and policies she is carrying over from her prior role as chief assistant to Kathleen Rice, now a congresswoman representing Nassau’s Fourth District, as well as initiatives Singas would like to implement.

“So much of the work that Kathleen started, we did together,” she said. “We began a lot of really innovative programming and I want to keep my eye on the mark and continue all the great work we’ve done.”

That includes concentrating on gun and gang violence, abuse of heroin and prescription drugs, and prosecuting cases of drunken and drugged driving and boating while intoxicated. Another issue of continued concern is the special-victims’ work Singas began when she was deputy chief of the domestic violence bureau in the Queens district attorney’s office.

When asked about new initiatives, Singas, who plans to seek a four-year term in November and has been actively raising campaign funds, emphasized working with adolescents to provide crime-prevention strategies.

“I think working with the youth and trying to give them options to get out of a life of crime is a worthwhile endeavor for all of us, so that’s something I would like to continue working on,” she said.

“Other initiatives include protecting children from Internet predators or predators in their own home, whether it be from physical abuse or sexual abuse. To me that is a priority. I spent a long time talking to kids who are victims of crime, and it is so devastating for a community….I will continue my work there. But there’s a lot to do. I want to continue doing gang initiatives and working with federal agencies to help drive down our gang issues, and continue to do gun buy backs. These are important initiatives and it just lets the community know we are invested and we’re here to help.”

Singas also spoke about intelligence-driven prosecution and mapping out the high-crime areas in Nassau, so resources can be concentrated there. “Let’s map them; let’s flood our assistance to those schools because that’s a way for us to educate and get to where the problem is, as opposed to diluting our resources. Those are the things we are thinking about. You really have to be smart
on crime.”

Another concern is the rise in financial crimes and scams targeting the elderly. Singas said that as these crimes become more specialized, so are the ways in which they are handled. “We have financial investigators in our office and we have ADAs who are just dedicated to the financial crimes, because they know everything about mortgages and those kinds of scams. It’s impossible to get up to speed on that unless you’re specialized. The same way we go to doctors who specialize, we try to do the same thing in law enforcement.…It’s a recognition that we have to step up our game, because the tools that we had before are not the same tools we need to combat crime [today].”

Singas also spoke about the four-legged employee at the DA’s office, Mega, a Labrador hired by Rice to serve as a facility dog. Singas explained that it’s Mega’s job to help children and adults relax when they are reporting a crime.

“We had a 6-year-old in the office and she was talking about a sexual crime,” Singas said. “Mega just sat in her lap and the girl was petting her and she kept telling our assistant her story. Mega is like a magic dog.…You can’t believe how incredibly difficult it is for a child to talk about something that’s happened to them, something that is so horrific. Having Mega there, she just melts your heart.”

Singas said she is also working on animal crimes and legislation. “We’re trying to put those crimes into the penal law so we can prosecute them as criminal offenses.…You know in domestic violence one of our indicators for violence is, has the batterer been violent with an animal, because that is a huge sign that that person is really dangerous.”