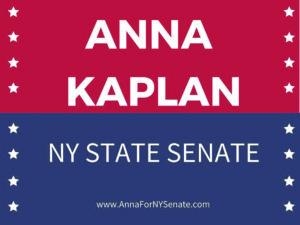 Town of North Hempstead Councilwoman Anna Kaplan will announce her candidacy for the New York State Senate seat for District 7, which is currently held by Republican Elaine Phillips, on Friday, April 27, at 4 p.m., following a rally at 3:30 p.m., at the “Yes We Can” Community Center at 141 Garden Street in Westbury.

“As of now, we anticipate a primary for the nomination which is something we were hoping to avoid,” said Steven Markowitz, president of the Great Neck Democratic Club. “In keeping with our longtime policy, the Great Neck Democratic Club will not be making an endorsement in a Democratic primary, but we do urge you to support and work for the candidate of your choice. The most important objective, of course, is to defeat Senator Phillips who showed her true colors by voting against strengthening gun control laws, thereby siding with the NRA when it comes to the safety of our children, and voting against further protections of child sex abuse victims. Either of the two potential Democratic candidates will stand up for what’s right.”

Kaplan was elected as councilwoman in November 2011 in the Town of North Hempstead, the fifth-largest town in the United States with a population of more than 220,000 residents. She represents the more than 40,000 residents in the town’s Fourth District, which includes the villages of Great Neck, Great Neck Gardens, Kensington, Kings Point, Thomaston, Roslyn, Roslyn Estates, North Hills and the unincorporated areas of Great Neck and Manhasset.

Currently serving her second term, following a contested election in which she received more than 67 percent of the vote, Kaplan is one of only two Iranian-Americans serving in elected office in New York above the village level.

Prior to being elected councilwoman, Kaplan served on the Town of North Hempstead Board of Zoning Appeals and was vice president of the Board of Trustees of the Great Neck Library.

In 2016, Kaplan entered the Democratic Primary in New York’s Third Congressional District, hoping to become the first Iranian-American to serve in the United States Congress. While she did not win the race, she won the endorsement of EMILY’S List and the National Organization for Women and her dramatic life story captured the attention of the national media.

In 2010, she was recognized as a Woman of Distinction by former New York State Senator Craig Johnston. Following her historic election as the first ever Iranian-American elected to town office in New York, she was profiled by Lifetime Networks as part of their “Remarkable Women” Campaign and was spotlighted in Senator Kirsten Gillibrand’s “Off the Sidelines” call to action for women to make their voices heard.

Kaplan was born Anna Monahemi in northern Iran and was raised in Tehran. When the Islamic Revolution took place in 1979, she was sent to the United States alone at age 13, as part of an international effort to help the Jewish children of Iran leave the country.

Originally arriving in Crown Heights, Brooklyn, as a child refugee, Kaplan was eventually sent to live with a foster family in Chicago, where she attended high school and learned to speak English while waiting for her family to join her in the U.S.

After reuniting with her family, Kaplan moved to Forest Hills and then to Great Neck. She graduated from Stern College for Women at Yeshiva University and received a JD from Benjamin Cardozo School of Law.

Kaplan, who is fluent in Farsi and Aramaic, became a citizen in 1995. She resides with her husband, Darren, in the Village of Kensington, where the couple raised their two adult daughters.