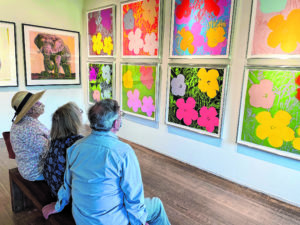 Sports and art have at least one thing in common. With enough hard work, you make your luck (just ask the underdog Islanders, whose playoff run almost led to the Cup) or the first place Mets. The Nassau Museum of Art caught a huge break this summer as well. I vividly remember the day that I received the phone call from Bank of America asking if Nassau County Museum of Art would want to showcase the internationally acclaimed exhibition, Andy Warhol: A Life in Pop from the Bank of America Art in Our Communities program, as it unexpectedly was available to us—at no cost to the museum. I immediately shouted, “Yes, of course.” The trustee committee that has to approve shows (including Angela Susan Anton) quickly voted to make it happen. And it turned out to be a perfectly timed lifeline as the museum helps Nassau County recover. As soon as timed tickets went on sale, they were booked so quickly that before the opening on May 8 it was necessary to open July and August dates. Schools signed up for classes and groups began appearing for our daily tours at 2. Everywhere Warhol goes, attendance records follow. For seasoned art lovers and for newbies, this is this summer’s must-see show, the first time a Long Island museum has had a solo Warhol show.

There were several good reasons that the Nassau Museum was the first choice in the New York area. Boldly open since last July with two exhibitions that were particularly strong on the art of our time and having mounted a powerful gallery of Keith Haring works two years before (Haring was Warhol’s protégé), the museum has put top-shelf art on the walls as a service to the community. Bank of America has shown its support for years through another generous program, Museums on Us, which allows Bank of America cardholders to enter free on the first weekend of every month.

Bank of America’s global art program supports 2,000 nonprofit cultural institutions each year. The efforts extend into areas such as sponsorships, conservation and a new Masterpiece Moment video series. They believe the neighborhood playhouse can be as important as the world-class museum or orchestra in its value to the community, in the lives of its citizens and in the education of its young people.

That sense of shared purpose between Bank of America and the Nassau Museum has made for a magic summer. A milestone for the museum in its progress toward national recognition as a destination for lovers of great art, the Warhol exhibition is a great example of corporate magnanimity. It has been loaned to museums not just in the United States (London and Johannesburg have been part of the tour) and everywhere it goes it reveals a side of the legendary artist, arguably the most important figure in the history of art since Picasso, that even the die-hard Warhol connoisseurs do not know. Because the show features portfolios dating back to the earliest breakthroughs in Pop (Marilyn Monroe, the Campbell’s Soup Can, Muhammad Ali) it permits the viewer to travel along the path toward mastery that the artist pursued. An exquisite group of hand-colored flowers, featuring the Japanese aesthetic of Ikebana, is presented in the intimate space of the mansion’s former boudoir, an extraordinary confluence of architecture and art. In its first month, the show had already drawn more than 6,000 viewers as well as rave reviews in print and on television, many of them ecstatic in their praise.

“The relationships between the exhibit and the building creates a thoughtful and unmatched museum experience, particularly on Long Island and even New York. It’s a gem—BRAVO!” wrote Eric Dever, a well-known artist based in Water Mill who knows his Warhol well. He just finished a series of landscapes that he made after he was selected as an Andy

Warhol Project honoree to paint in Montauk at the preserve where Warhol had lived.
The exhibition continues at the Nassau Museum in Roslyn Harbor until Nov. 7. A guide to the show can be downloaded and timed reservations can be booked at nassaumuseum.org.

—Charles A. Riley is the museum director