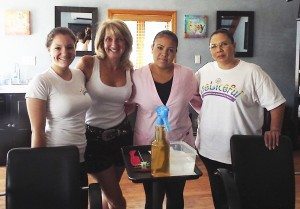 The name is a deliberate misspelling, but it accurately describes what goes on in the quaint, neatly decorated cottage at 216 Lakeville Rd., in back of the strip mall, just south of Northern Boulevard.

DeLiceful, dedicated to ridding children of the almost unavoidable infestation of lice, is now in its fifth year at the location owned by Kathy Zappulla, who first learned about the pesky bugs (who are anything but delightful) the hard way.

She was in Washington, DC, at a meeting seven years ago when the dreaded call about lice came in from her daughter’s school in New York.

“I panicked,” she said, and she immediately flew back home. After having her daughter treated, she called in a cleaning service.

“I paid $1,500 to clean my couches, my rugs, everywhere in my home,” she recalled. “I took all of my clothing out of my closet and sent it to a dry cleaner.”

“What a waste of time and money it was,” she admitted. The best treatment would have been to run a vacuum in those areas of concern.

“There are all those myths out there, but you can only get lice from head-to-head contact,” Zappulla emphasized. Lice are most common in children from ages 3 to 12, according to the American Academy of Pediatrics.

Zappulla also gave reasons why it’s so difficult to prevent an infestation. “Today, kids are indoors more,” she said. “They’re all over their iPhones, iPads and selfie sticks. Kids’ heads are constantly on top of each other.”

The likelihood of getting lice by sharing a phone or other object is slim according to Zappulla. “Lice don’t fly,” she explained. “They crawl, nine inches in a minute. Lice have six legs and they hold onto the hair shaft for dear life. They’re not getting off the hair to jump onto a phone.”

“Yes, if a child is severely infested and the bugs are literally dropping off the head, you can get it from [sharing] a phone. Pets can’t carry lice either. It’s a human parasite.”

Zappulla is critical of over-the-counter remedies and old style home treatments and says that drugstore kits contain unsafe chemicals. “We use nontoxic products that are pesticide free,” she says.

“The drugstore kits also come with a comb in the box where the teeth are so wide apart, an ant could crawl through them. They’re not sufficient for removing head lice.” An adult bug is about the size of a sesame seed and usually pale gray in color.

“We use a mousse-based product and saturate the hair,” she said. “It stuns the bugs and makes their removal easier. We wear magnifiers that magnify our eyesight 10 times. A baby bug is the dot of a No. 2 pencil. You can’t see that with the human eye.”

“We then use a professional comb. We comb, comb, comb until we see no evidence of lice. Then we section the hair and provide combing again four different ways.”

The inside of Zappulla’s immaculate shop could easily be mistaken for a modern barbershop with three chairs facing a large flat screen TV.

“Kids are watching a movie, eating munchies, and playing with iPads,” she says, in drawing a comparison to the old way of treating the problem that involved long hours. “They come to a professional salon like ours and they can leave here in two hours, lice free.”

Lice aren’t just a problem for young children. “There’s no season, no reason,” Zappulla said. “We had a bride the night before her wedding. Her flower girls had lice. We had the whole bridal party here.”

“We treat a lot of grandparents, too,” she added. “Grandparents are loving people but they lay in their grandkids’ beds sometimes and read goodnight books to them. You don’t have to have long hair or any hair to get lice. They live and feed off the scalp.”

Though the existence of lice has been traced back to the time of the Egyptian mummies and the creatures don’t seem to be leaving anytime soon, Zappulla did offer a hint for protecting against them.

“Lice don’t like the scent of mint,” she revealed. “We recommend that parents keep their kids’ hair in a bun and spritz it with a mint spray. It acts as a repellent, but it’s not a 100 percent guarantee.”

Though DeLiceful is gearing up for the start of school, Zappulla’s staff is busy all year-round, especially during the camp season. She’s currently offering parents free head checks by either calling 516-773-4333 or going online at www.deliceful.com.