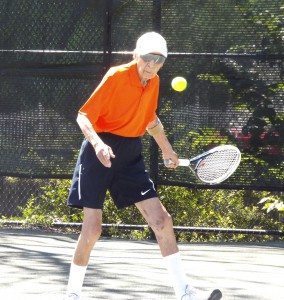 Bernie Kass may not be among Great Neck’s best tennis players, but the 95-year-old Great Neck Plaza resident is probably the oldest.

Kass, whose next birthday is in September, is out on the Memorial Field courts four or five mornings a week, weather permitting. He enjoys his somewhat celebrity status with the other players, who all make a special effort to greet him as they arrive.

One of those players, Richard Skodnek, a retired psychiatrist, marveled at Kass’ vitality and energy. “He’s wonderful,” said Skodnek. “He’s a great guy. Everybody loves him, and you know what the problem with this man is? He’s getting younger. And, that’s not fair because he’s the only one here who is.”

Park District Commissioner Frank Cilluffo is another Kass admirer. Cilluffo has developed a close relationship with him since meeting him two years ago when Cilluffo was campaigning for election.

“During my campaign, I started playing tennis,” Cilluffo said. “Bernard took me into his tennis family and showed me how to hit the ball the proper way. Since then, I’ve been friends with him forever. He was my inspiration. I play lots of tennis, and I’ve played a lot of competitors. Bernie may not have the ability to run, but he sure can place the ball and make me run back and forth. He gives me a challenge.”

Cilluffo gave Kass a special present last year after he found an oversized tennis racket on display at Sportset Tennis Junction. “It was perfect,” the commissioner said. “I had to have it and gave it to him for his birthday. He hung it up on his wall.”

Kass first started playing tennis when he was in his 40s, but it was only for a brief time. “One of my kids said, ‘Dad let’s go play and hit some tennis balls.’ He hit the ball to me, and I got hit in the leg. It tore my calf muscle. I was on crutches for months.”

He didn’t play again until he was 55, joining a program in Great Neck and learning from a pro. Kass has lived in Great Neck for over 60 years and had a successful career as a housewares importer. He also served as treasurer for COPAY (Community Organization for Parents and Youth, Inc.) for many years.

Despite having open heart surgery when he was 65 and having to wear a pacemaker now, he plays for an hour to an hour-and-a-half at Memorial and plays indoors on the courts on Steamboat Road with pro Mark Johns.

“It used to be my serve,” he responded when asked about the strongest part of his game. “Now it’s not, because I’m not as steady on my feet as I used to be. My reflexes and timing are not what they used to be.”

Kass is a left-hander and is proud of staying active. “I have a pacemaker, so they put it on my right side, so it doesn’t get in the way of my playing,” he explained. “Everyone says to me, medical professionals, players, friends, ‘Bernie, keep playing.’”

He still drives to the courts from his apartment in the Plaza. “I have a very old car,” he said. “I’d hate to buy a new car because all I do is drive locally.”

Kass and his wife, Donna, were married for 61 years before she died several years ago. They have two sons and three granddaughters.

He also has a special fondness for collecting carved elephants, based on his wife’s love of the figurines. He has over 150 of them on display.

“There was a gift shop, and she loved carved elephants,” he reminisced. “One day, an elephant was missing from the shop, and she was very, very upset. I wasn’t so upset, and she said I had no heart, no feelings.”

“On our first anniversary I gave her that elephant. She was so pleased that I said, ‘I will give you an elephant every year on our anniversary.’”

“So, now I have 61 elephants on my shelves, but I have others which people gave us and that we collected together.”