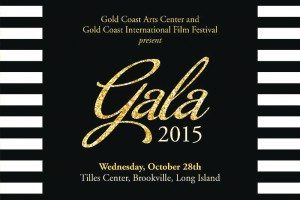 On Wednesday, Oct. 28, the Gold Coast Arts Center will kick off its 2015 Gala at the Tilles Center for the Performing Arts at 720 Northern Blvd., Greenvale. Grammy-Award winning musician, conductor, arranger and music archivist Vince Giordano (Boardwalk Empire) and actor and producer star of Showtime’s Homeland Navid Negahban will receive Artist of Distinction Awards in music and film, respectively. The Gala will be hosted by Emmy Award-winning journalist and Eyewitness News correspondent Kristin Thorne, who will present the “Woman of Influence” Award to director Patricia Riggen.

Giordano and his sensational band, The Nighthawks, have also recorded for Terry Zwigoff’s Ghost World, Tamara Jenkins’ The Savages, Robert DeNiro’s The Good Shepherd, Sam Mendes’ Away We Go, Michael Mann’s film Public Enemies and John Krokidas’ debut feature, Kill Your Darlings, along with HBO’s Grey Gardens and the miniseries Mildred Pierce. Most recently Vince and the band recorded music for HBO’s Bessie starring Queen Latifah; Cinemax’s The Knick starring Clive Owen; an upcoming Haynes’ film called Carol; and a new pilot for Amazon. The Nighthawks are also seen and heard in the USA Network series Royal Pains and in the PBS series Michael Feinstein’s American Songbook. Hudson West Productions recently completed a feature documentary called Vince Giordano—There’s a Future in the Past.

Giordano’s passion for music from the 1920s and 1930s, and the people who made it, began at age five. He has amassed an amazing collection of more than 60,000 band arrangements, 1920’s and 1930’s films, 78 recordings and jazz-age memorabilia. For more than 40 years, Vince Giordano has single-handedly kept alive a wonderful genre of American music that continues to spread the joy and pathos of an era that shaped our nation.

Navid Negahban, sometimes called “the man of a thousand faces,” is most widely known for his role on the Emmy award-winning Showtime Series Homeland opposite Claire Danes, Mandy Patinkin and Damian Lewis. Among his many fans are Israeli President Shimon Peres and U.S. president Barack Obama. He currently stars in the upcoming Baba Joon, which premiered at the 2015 Toronto International Film Festival and went on to win five Ophir Awards, the equivalent of the Israeli Oscar. The film will be this year’s entry for Israel at the Academy Awards for Best Foreign Film.

Negahban has worked with some of the most respected names in Hollywood including Clint Eastwood and Bradley Cooper (American Sniper), Tobey Maguire and Jake Gyllenhaal (Brothers), Tom Hanks, Julia Roberts and Amy Adams (Charlie Wilson’s War) and Clive Owens and Juliette Binoche (Words And Pictures). He will also appear in upcoming films alongside such stars as Chloe Grace Moretz, Richard Armitage, Carrie-Anne Moss, Thomas Mann, Jonathan Rhys Meyers, Olivia Thirlby and John Hurt. Born in Mashhad, Iran, Negahban studied theater in Iran, Germany and the United States, and is fluent in English, Farsi and German.

Patricia Riggen is today one of the few Latin-American female directors working in Hollywood. Originally from Mexico, she started her career as a screenwriter, producer and film executive at the Mexican Film Institute. She later moved to New York to earn an MFA in directing and screenwriting at Columbia University. Her thesis film, The Cornfield, screened at more than 30 international film festivals and received 20 awards, among them the Student Academy Award, the Mexican Academy Award for Best Short Film, the Student Emmy and a Directors Guild of America (DGA) Award. Her next film was the 30-minute documentary film Family Portrait, which won the Jury Award for Best Short Film at the Sundance Film Festival 2005.

Riggen made her feature film directorial debut on Under the Same Moon, which she also produced. It premiered at the 2007 Sundance Film Festival to great accolades, and was acquired for worldwide distribution by Fox Searchlight and The Weinstein Company. The film recorded opening weekend record numbers for a Spanish language film in the U.S., and was a box office success in both Mexico and the U.S.

Riggen went on to direct two features for young audiences, Girl in Progress, starring Eva Mendes, Patricia Arquette and Cierra Ramirez; and the musical Lemonade Mouth for the Disney Channel, which garnered 12.5 million viewers in its first two airings. She was honored by her peers with a Directors Guild of America Award nomination for her work in the latter.

Riggen directed the English-language Chilean mining drama The 33 to be released by Warner Bros. in November 2015. The film is based on the real events surrounding the 2010 disaster when a group of 33 miners were trapped in the San José Mine in Chile for 69 days. Antonio Banderas, Rodrigo Santoro, Juliette Binoche, Gabriel Byrne, James Brolin and Lou Diamond Phillips lead the ensemble cast of the film about the rescue effort that captivated the world. She also recently wrapped production on the Sony Pictures drama Miracles from Heaven, starring Jennifer Garner and Queen Latifah.

Kristin Thorne is a Long Island correspondent for WABC-TV’s Eyewitness News. Before joining the Eyewitness News team in January 2012, Thorne was a reporter at News 12 Westchester, and before that worked at WHTM-TV in Harrisburg, PA. Thorne loves being involved with the Long Island community she serves, and is a volunteer with Big Brother, Big Sisters of Long Island and with the Little Shelter Animal Rescue and Adoption Center. A graduate of Georgetown University in Washington DC, she earned her master’s degree from the prestigious Medill School of Journalism at Northwestern University. She is the recipient of an Emmy Award and has received numerous Emmy nominations while also having been honored with a regional Edward R. Murrow Award.

On Wednesday, Oct. 28, join the Gold Coast Arts Center in honoring these masterful and groundbreaking talents for their 2015 Gala hosted by Eyewitness News’ Kristin Thorne at the Tilles Center for the Performing Arts at 720 Northern Blvd., Greenvale.

To purchase tickets and journal ads and for information on sponsorship levels, visit www.goldcoastarts.org/gala-2015.

The Gold Coast Arts Center is a nonprofit organization dedicated to promoting and supporting the arts through education, exhibition, performance and outreach. For more than 20 years, they have brought the arts and arts in education experiences to tens of thousands of people throughout the region. The Arts Center is an affiliate of the John F. Kennedy Center for the Performing Arts: Partners in Education Program and National Gallery of Art, both located in Washington, DC.