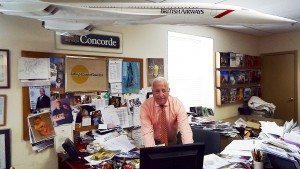 An important lesson learned from a wealthy Kings Point businessman almost 45 years ago laid the foundation for Great Neck resident Jeffrey Kane, who has been running Jeffrey’s World of Travel at 3 Grace Ave. since 1971.

“He was one of my very first clients,” said Kane, who has been a peninsula resident for 44 years with his wife, Susan. “He asked me to book the very best room in the very best hotel in Hawaii with an ocean view, a year in advance.”

Kane’s first attempt at making the reservation was unsuccessful and he called his client back to tell him that he couldn’t have the room.

“He said, ‘Jeffrey, I’m going to give you your first lesson in business: Never say no. Say it’s not available now, but I’m going to work on it and whatever the costs are associated in getting the accommodations, I will bear,’” Kane recalled.

“I want you to call the hotel every single day,” Kane’s client told him, “and call until the general manager relents.”

Six months later, Kane still couldn’t get the manager to grant his request. “Finally,” Kane continued, “my client told me ‘you’re going to fly to Hawaii today.’ He paid for me to fly to Hawaii and I walked into the manager’s reception area and told them I’m here to see the manager, and that I’m one crazy travel agent. I could hear the manager in his office say ‘it’s got to be that Jeffrey Kane from Jeffrey’s World of Travel.’”

Kane, of course, got that reservation.

With a staff of 10, including his oldest son, Harrison, who is his vice president (his younger son, Lowell, is a director of student services at Purdue University), Kane has always remembered that lesson. “It’s still my toughest challenge,” referring to the difficulty in telling a client that a booking isn’t possible.

Kane is extremely proud of his first grandchild, Max, Harrison’s infant son. Max is named after the travel agent’s father, the man who sparked Kane’s interest in the travel business at a very young age. “My father used to travel to the Far East for business purposes and from the time I was nine years old, I was planning his trips for him,” said Kane. “He took us all over the world with him. I always knew I was going to open up my own travel agency.”

He sustained his dream, working in several agencies during high school and college, and developed a following. After graduating from Brooklyn College, he hit a roadblock, getting drafted and serving in Vietnam. But he saw no action.

In 1971, he married Susan, who is now retired after teaching special education in Great Neck and Queens. The travel agent started working as a tour director and met builder Howard Rose through Rose’s son. Kane was invited by the builder to open as 3 Grace Ave.’s first tenant in 1971.

Kane was asked to compare the travel agent industry now to the way it was back when he started. “Two different worlds,” he answered. “There was no Internet. There were no computers. Everything then was hands-on. When you made a reservation you had to call the airlines. You’d spend hours on hold sometimes. We wrote tickets by hand and there were no electronic tickets.”

Jeffrey’s World has many corporate clients, and counts Kelly Ripa and her husband, Mark Consuelos, as clients and as friends. “We met them about eight years ago in Turks and Caicos,” he said. “I had no idea who they were, because I don’t watch too much television.”

Of all the places he’s been, Bermuda remains his favorite. “I find that it’s 90 minutes to paradise,” he said, referring to the flight time. “You walk onto that island and it’s physically beautiful, spotlessly clean, the people are wonderful and you just regenerate yourself there.”