Each day in Great Neck, thousands of residents walk to the train station and commute into New York City for work. On Sept. 30, my beloved husband, Oren Bennaeim, was one of those commuters.

Oren dropped off our son at school, went to the gym and then was walking to the train station. He was waiting at the crosswalk on South Middle Neck Road and Barstow Road by the TD Bank and the meditation center. He started to cross the street as the light was turning red. A Nissan Rogue was in the left hand lane heading south, and when the car in front of him was stopping at the light, the driver of the Nissan swerved into the other lane, struck my husband and continued driving.

My husband was rushed to North Shore Hospital, but he never regained consciousness. He died six days later.

Oren was the kind of person who, if he thought he bumped into you walking, would be the first to say how sorry he was. He was a big man, with an even bigger heart.

I am writing this for two reasons. One, if anyone saw the car that hit my husband on Sept. 30, please call the detective in charge of the case. There is video from around 9:40 a.m. showing that the car was driving south on Middle Neck Road near the movie theater. The car is a white or light gray Nissan Rogue. Because of the time of day, the police believe that the driver is either a resident of Great Neck or was dropping off an employee who works in Great Neck.

The second reason I am writing this is to urge Nassau County to put a red light camera at this very dangerous intersection. The intersection has two lights very close together and, because of the way the lights are timed, drivers often speed up to go through the first light where Oren was hit, so they can also go through the second one. The lack of cameras in Great Neck is making it very difficult for the police to compile information about the car that killed my husband. In order to protect our loved ones, we need to reach out to our legislators to demand a red light camera at this intersection. Drivers change their habits when they know there could be the consequence of a ticket because of how they are driving.

The sadness we feel each time we pass that intersection is so deep. If someone had not been speeding and was willing to stop at that red light, Oren would not have died that day.

I don’t want this to happen to anyone else’s beloved spouse, father or even child. There is no way to express the immense loss we feel, but possibly making our town just be a little safer would at least mean something positive came out of such insurmountable loss and sadness. Everything becomes more precious after our hearts are broken. I don’t want another Great Neck resident to have to go through this same heartbreak.

Oren was the fourth person to be hit on South Middle Neck Road in the past two years. In less than three months since he died on Oct. 6, 12 other people have been killed in hit-and-run accidents in Nassau County, according to Detective Gary Ferrucci, a homicide detective for the Nassau County Police Department and the head of the Traffic Crash Investigation and Reconstruction unit, who is in charge of my husband’s case. Detective Ferrucci says the alarming rate of accidents is because drivers are so overstimulated by their phones, GPS and music that they are often distracted.

Loss visits us all. I hope, though, that no one else will be killed on the streets of our town.

If the person who hit my husband, Oren, with his or her car is reading this or if you know the person who did this, I hope you will do the right thing and come forward. Both our lives are forever changed because of one split second that neither of us saw coming. The only difference is that you have a choice about what happens next, so those of us who knew and loved Oren can have closure.

There is no starting over in this tragedy, only admitting and learning to live with what happened—and finding some forgiveness for yourself in that process. Coming forward is the only way that process can begin. Our lives will never be the same after this tragedy, but neither will yours because no one can take another life without their own life being completely altered.

Contact Nassau County Legislator Ellen Birnbaum at 516-571-6210 and the Nassau County Department of Public Works at 516-571-6900 to let them know that we would like a red light camera installed at South Middle Neck Road and Barstow Road. 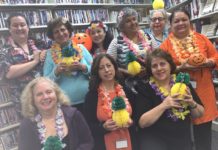 Letter to the Editor: School Board Recognition

Letter to the Editor: School Board Recognition