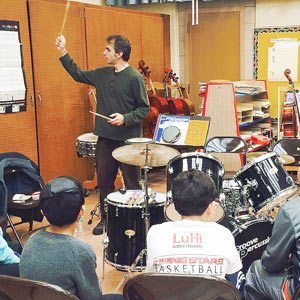 It started with the donation of a no-longer-used set of drums and led to a master class in drumming. Mindy and Richard Rosenfeld, whose sons graduated from South Middle and South High Schools, asked Alan Schwartz, South Middle music department head, if he could use a set of drums that were no longer being used. Mr. Schwartz did not have need of them, but contacted the district’s instrumental music teachers to see if anyone else might. Amy Kempton at the J.F. Kennedy School said she would be delighted to accept the gift.

When Kempton received the drum set from the Rosenfeld’s she was in for a wonderful surprise. “They are in mint condition,” she said, “and we are so happy at JFK to have them!”

With a set of excellent drums now a part of Kennedy’s instrumental music collection, Ronald Gimondo, Kennedy’s principal, acting on a request from Ms. Kempton, located a professional drummer from the Long Island Drum Center, in Little Neck, who would do a drumming class for a small group of fourth- and fifth-grade students. Tony Genovese, from the Center, volunteered his time, first making adjustments to the drum set, and then conducting a master class for the students.

Students were most enthusiastic about the drumming class. Christopher Yang expressed the students’ reactions when he said, “It made me know more about drums and there were a lot of things to do and learn during the class.”

Who knows, there might just be a burgeoning Ringo Starr or Buddy Rich among Kennedy’s young drummers!