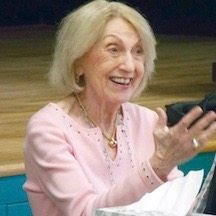 Ethel Siegel runs into a lot of people in Great Neck who know her from her longtime role as a voice teacher at the Great Neck Public Schools Adult Community Education program at Cumberland and from her other musical work in Roslyn and Manhasset.

It turns out there are also several people in Great Neck who have recognized her and remember her when she was a well-known child prodigy on the piano, growing up on the Lower East Side as Ethel Straus.

How Siegel developed her career from falling in love with the piano as a 9-year-old, when she first saw one in her school’s auditorium, to a rewarding one of teaching voice that has lasted 30 years, is a complicated story filled with emotional pain, disappointment and, as Siegel herself describes it, “tenacity, perseverance and a passion for music.”

Siegel, whose husband Marvin passed away about four years ago, has lived in Great Neck since 1981. When she was at the Parkwood complex recently, two women stopped her and asked, “Aren’t you little Ethel Straus who used to play the piano, whose cousin was Artie Shaw?”

She was shocked that they had remembered her and her first cousin, the famous clarinetist and bandleader in the ‘40s, who was briefly married to both Ava Gardner and Lana Turner. Ethel’s father, Morris, was Artie’s uncle and many biographies of Shaw mention Shaw’s assertion that his musical talent came from Morris, a cantor and house painter.

There was a 9-year-old brother who was closest in age to her, but the oldest of the other siblings was 21 when she was born. “Because my mother rejected me, so did they.”

“I was scared to death of that woman,” she recalled. “I had no self-esteem.”

But Ethel’s love of the piano as a young girl was powerful and she was determined to have one, coming up with a plan to get one by knocking on apartment doors in neighborhood tenements and asking, “Do you have a piano? Do you want to sell it?”

She actually found a woman who was willing to sell an old upright to her for $7. The family really couldn’t afford such a luxury, but Ethel convinced her mother to buy it, paying an additional $11 more to have it moved.

Her mother actually paid for lessons, too. “It was 50 cents a lesson, but my mother also had to give the teacher a shot of whiskey after each lesson.”

As a very shy eighth-grader, Ethel wanted to try out for Music & Art High School and surprised everyone when she was asked to sing and revealed her talent as a soprano.

But disappointment happened again, as there was no audition for the specialized school. Her mother saw no value in it and she wound up studying secretarial skills instead. Ethel did continue her playing and singing, but had no formal training.

After raising two daughters and working as a medical secretary, she went back to college at the age of 45. Ten years later she finished her degree in voice at Queens College and gained certification as a music therapist from Molloy College.

After working in the Roslyn school district and the Sid Jacobson JCC, she started with the Great Neck program 12 years ago. Currently, she’s coaching the seven members of the Cumberland Chorus.

“I have the greatest class right now,” she says. “They are so unbelievably eager to learn technique and to improve. I get such joy in sharing my knowledge with them.”

Despite all of the difficulties she had growing up and the detours she had to take later in life, Ethel finds tremendous satisfaction in what she’s doing today. “I’m doing what I love,” she explains. “This is my passion.”