Nowadays, it pays for high school students to become well-learned in as many subjects as possible, especially given the heightened level of competition that clogs each student’s path to college. It therefore shouldn’t come as a surprise that a subject as in depth as environmental studies would be an ideal proving ground for some of Long Island’s sharpest young minds, as evidenced by the 19th annual Envirothon Competition, which was held Tuesday, April 25 at Old Bethpage Restoration.

According to Sharon Frost, one of the organizers of the competition, the Envirothon started “as a way of assisting science teachers in incorporating environmental science into their science programs.” Its roots go back to 1979, when an event called the Environmental Olympics was held in Pennsylvania. The Envirothon eventually came to Long Island in 1999 and has continued to develop on the national, and even international, level.

“We’re the local component of a state competition and after the state competition it goes on to a national competition, which will be at the end of May,” Frost said. “It’s even international—Canada is involved too. Every year we grow. More schools get involved. [The local event is] actually almost as big as the state event. So we’re looking forward to growing every year and getting more students aware of the environment and how to protect it. It’s extremely important.”

This year’s local competition featured science students from 17 high schools around Long Island, including Farmingdale, MacArthur, Division, St. Domenic’s, Chaminade, Garden City and Great Neck South, among others. Each school could send one or two teams, comprised of five members each. A winning team was declared for both Nassau and Suffolk County, with Great Neck South’s team receiving the top prize for Nassau County, which includes a scholarship for each team member. As Frost points out, though the Envirothon is fun for its participants, the stakes are high, particularly for students who are approaching their college careers.

“It’s very competitive,” Frost said. “We give $500 scholarships to each of the students on the winning teams. So we give out $5,000 worth of scholarships a year. And we’ve given over $64,000 in scholarships since the beginning.”

The nature of the competition mandates that students be not just smart, but versatile. Groups work together at stations devoted to five different subject areas—aquatics, forestry, wildlife, soil and a current issue. At each station, a multiple choice test is given, with many of the questions necessitating hands-on solutions involving the use of maps or other equipment, and the competition concludes with each group giving an oral presentation in front of a panel of judges. While each member of a team is expected to become an expert in one of the five subjects, students spend several months ensuring that they have a healthy grasp on all facets of the competition.

“They spend a lot of time looking at resource material,” said David Friedman, a teacher at MacArthur High School. “But they go beyond that as well. [With} each of the topics, there’s a student that basically spearheads that topic and becomes an expert in that area. You have five kids on the team and an alternate, so everyone takes an area to be the expert, but you have to know a little bit about every topic. It’s competitive, but it’s fun.” 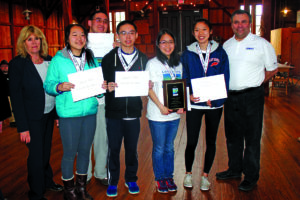 That versatility, Frost says, will pay dividends for students who are hoping to pursue careers in science, which is why the competition’s learning objectives are so precisely developed. The tasks require not just knowledge specific to environmental studies, but more broad skills like thorough researching, effective decision making and efficient problem solving, the likes of which is integral towards finding success in various scientific fields.

“A lot of them go on to college to study environmental studies, or to study biology, depending on what field they’re interested in,” Frost said. “There’s so many fields that you can get involved with as far as the environment goes. You can work for the towns, the government, private [sector], engineering. It goes on and on, the amount of fields you can get into—it’s vast.”

“With any field, learning how to work as a team and delegating responsibility, accepting responsibility. It’s important,” Friedman added. “Two of my students this year are going to major in environmental science, and this is their fourth year [in the competition]. So it’s really helped guide them in a direction that they’ve decided they want to go.”

The relevance of the Envirothon’s learning objectives in today’s world wasn’t lost on the Envirothon’s organizers; this year’s brochure outlines its goal as helping students “aspire to an advanced level of understanding about their natural surroundings.” But Friedman noted that the most important thing for students is a thirst for knowledge and a desire to quench it, no matter the subject.

“Any time the students are seeking out information on their own, regardless of the subject, it’s an important thing,” Friedman said. “So whether this was a history competition or cellular bio, if they’re going out and they’re spending their own time outside of class, that’s valuable.”