As Independence Day officially signaled the start of summer and families and friends gathered to celebrate the nation’s birthday, something quite special was occurring at the United States Merchant Marine Academy (USMMA).

Each year, a new class of candidates arrives at the academy to begin their first steps toward becoming a midshipman. Upon arrival, the candidates checked in, received their assignments, received their first military haircut and were issued their uniform, name tag and housing assignment. Then they gathered on Barney Square as companies for the first time.

“Today, we celebrate with you as you open a new chapter in the service of the nation’s national security, marine transportation and economic needs,” he began. “You must have the conviction and the courage to always choose the harder right over the easier wrong.” 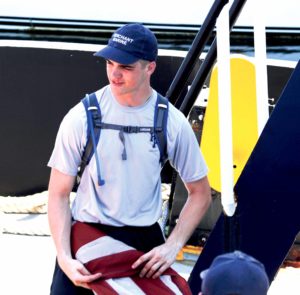 The candidates then said goodbye to their families and began what is called Indoctrination, a rigorous 21 days of academic, military and physical training. A first-hand description of the candidates’ training at Yocum Sailing Center at the USMMA waterfront follows, as I was fortunate to spend a day with both trainers and candidates.

Under the leadership of Midshipman Nicholas Supry, Class of 2018, the Regimental Waterfront officer, candidates were rotated among four skill stations: fire fighting, heaving lines, anchors and compasses, and knot tying. Other candidates sailed the Liberator to Brothers Islands, southeast of Manhattan.

While you might think of the USMMA as sailors, many do not sail at all. Some candidates choose to focus on power boating, such as Midshipman Steve Hinton, Class of 2018, the Regimental Waterfront executive officer, who is a Power Squadron skipper and also part of the Sport Fishing Team, a division of the Power Squadron.

The afternoon brought out candidates rowing in boats called monomoys and others sailing Sonars. Once Indoctrination is over, many of the candidates will join midshipmen to race Sonars in Manhasset Bay. 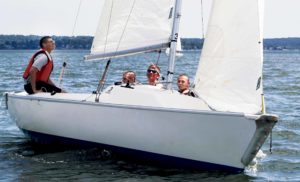 By the end of the day, it was apparent that this year’s candidates were exceptional. They were confident, enthusiastic, polite and eager to learn. Many arrived at the academy with no sailing or boating experience. Watching some of them struggle to figure out how to tie a bowline, expertly extinguish a fire, learn to toss a line and fold the American flag reminded me just how good the academy training is. Within a year, these candidates will become plebes and continue on their journey to become midshipmen. Upon graduation, they will be leaders of exceptional character who are well prepared to serve America’s marine transportation and defense needs.