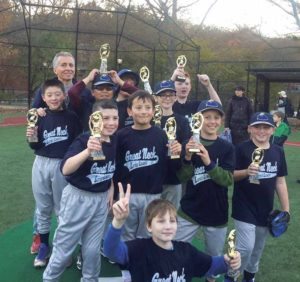 The path to the next level in youth athletics is seldom a clear one—and usually puts players’ skills to the test. The Great Neck Thunder baseball team, part of the Great Neck Little League, faced a challenge this season in fall league when Coach Sean Cenawood moved his players up from the minors division to the more-advanced majors division. Players in the majors division typically range from 10 to 12 years old, but the Thunder had zero 12-year-olds and even had a 9-year-old, making them the youngest team in the division in terms of average age. Despite this, the team won the championship on the strength of an extra-inning comeback.

“When you’re talking about 10 to 12, it’s a wide difference at that age,” Cenawood said. “To keep kids together, my team skewed really young. They were worried about playing the older kids, but they worked hard and practiced. I was surprised they made it that far. We played the team with probably the best players in the division. I think it was that commitment to hard work. On any given day, we were never the most talented team. But, we were the most prepared team.” 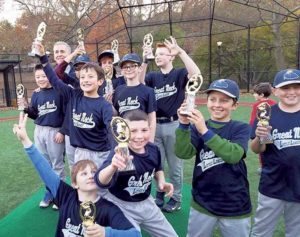 The Thunder held a 5-0 lead in the early innings of the championship game, but went into the bottom of the seventh trailing 9-6. However, the team rallied to a walk-off 10-9 win thanks to hits from the bottom two hitters in the order. Cenawood said that watching his players’ hard work pay off made the victory that much more satisfying.

“You bring the kids to have fun,” he said. “But Little League can teach them important life lessons [like] how to deal with adversity. I’ve had kids dominating in the minors and then give up three home runs in the majors. It gives them the ability to deal with ups and downs. The kids look out for each other. I love the competition. I just really love baseball.”

Cenawood, born in Glen Cove, has lived in Great Neck for the past 25 years and has been a Little League coach for the past five years. The league, made up of players mostly from Great Neck and New Hyde Park, was founded by Chris Tipa, who Cenawood believes is deserving of much credit.

“He’s done a great job with the league,” Cenawood said. “He’s our founding father. The community owes a big debt to him for getting the league up and running.” 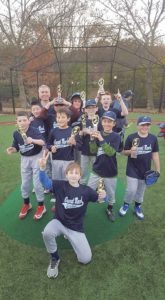 Dedication is something that Cenawood stresses in not only his players, but himself. He provides written full-game recaps that recount the individual accomplishments of every player on his roster and, true of many Little League coaches, sets aside time to coach while also working and having a family. But, it’s the dedication of the players’ parents, Cenawood said, that makes the season possible.

“None of it works without supportive parents,” he said. “In today’s society, kids have really busy schedules—piano lessons, chess club, many things. Parents’ finding the time for their kids is crucial. If I didn’t have them come and help with practices, there’s no way I could do this myself.”

In addition to the parents’ role, Cenawood identified the league’s ability to further establish a community within Great Neck as a virtue.