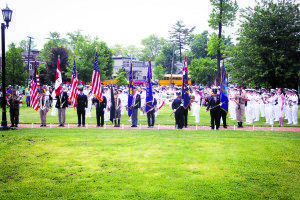 Memorial Day 2016 dawned with threats of downpours that could cancel the parade completely, but not a drop of rain fell along the parade route from Susquehanna Avenue to the Village Green, which stepped off at 9:30 a.m.

Onlookers began to assemble once it was evident that dry weather would prevail. As always, the parade was under the auspices of the Charles A. Fowler American Legion Post #160, Gilliar-Norwill Veterans of Foreign Wars Post #372, U.S. Merchant Marine Academy, Alert Engine, Hook, Ladder and Hose Co. #1, and Vigilant Engine & Hook & Ladder Co. 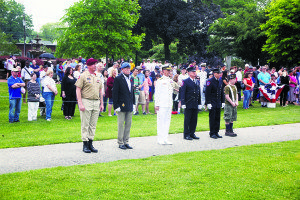 During Memorial Day, originally called Decoration Day, we remember the fighting men and women who made the ultimate sacrifice during wartime and conflict to protect the freedoms that we cherish. 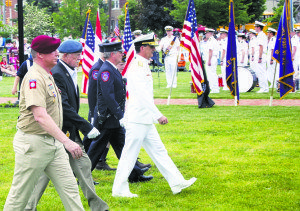 The parade was led by the members of the 2016 Plebe Class from the U.S. Merchant Marine Academy, followed by the massed colors of the American Legion, Veterans of Foreign Wars and the Alert Fire and Vigilant Fire companies. 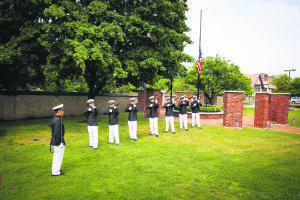 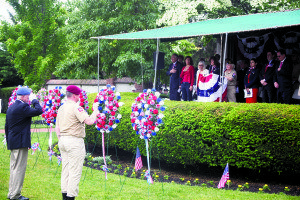 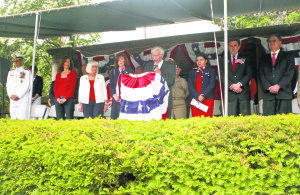 They were followed by midship men and women from the U.S. Merchant Marine Academy in Kings Point, members of the Alert Fire Company and the Vigilant Hook & Ladder & Engine Company. Most of the local civic, cultural, social and religious groups that signed up to march in the parade participated despite the dreary conditions—and provided a cross section of the town’s diverse residents. Great Neck Park District Commissioner, Vigilant Firefighter and Parade Committee Member Robert Lincoln recognized all the distinguished guests and each individual and group upon arrival on the Village Green. 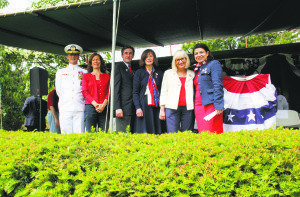 William Prince, past commander of VFW Post #372, posted the colors; the national anthem was played by the U.S. Merchant Marine Academy Band; and Rabbi Widom of Temple Emanuel gave a solemn invocation with a plea for peace and remembrance.

McCann introduced the grand marshal of this year’s parade, Rear Admiral James A. Helis, superintendent of the U.S. Merchant Marine Academy. The admiral spoke of the honor bestowed upon him by the parade committee and of the importance of making sure that our young people understand the significance of the day and that freedom is not free. He repeated that we must not forget the meaning of the day and why we are able to gather with friends and family, and as a community.

The parade’s guest of honor was Joy Bauman, wife of the late Howard Bauman. The parade was dedicated to the memory of Howard, who was a World War II veteran, longtime member of the parade committee and a Scout leader of Great Neck Boy Scout Troop #10 for more than 50 years, and passed away last year at age 95, surrounded by family.

McCann chaired the ceremony, which officially gave honors to the fallen, including the laying of the wreaths, playing of “Taps” and the firing team. As part of the ceremony, she spoke of the rights and freedoms that we enjoy and how they come at a price, and read a passionate poem about the cost of freedom not being free.

Father Rene Tapel of St. Aloysius Church gave the benediction, which was followed by the playing of “Taps” by the U.S. Merchant Marine Academy Band. The Honor Guard, comprised of Midshipmen from the academy, performed a three-volley ceremonial salute to the fallen
soldiers and veterans. It was an emotional moment when Karen Notovitz sang “God Bless America.”

Past VFW Commander Prince led the placing of the wreaths at the war memorial, located at the north end of the Village Green, which honors the memory of Great Neck veterans fallen during the past wars and conflicts.

Upon conclusion of the parade, the combined veterans and fire company color and honor guard proceeded to All Saints Church for a final salute honoring all military and fire department veterans who are interred there. The ceremony concluded as Notovitz sang “Amazing Grace.”

At the collation following the parade, VFW Post #372 Commander Larry Sheehan held an official ceremony to honor those POWs and MIAs who may never return. McCann gratefully honored Nassau County Auxiliary Police Captain Maria D’Amelio, who was recently honored by Nassau County for more than 1,600 hours of volunteer service as a member of the Police Auxiliary to the Great Neck Community, for all her assistance to the parade over the years.

The Great Neck Memorial Parade Committee is grateful to everyone involved in the planning and execution of the parade, to the community groups who came out to remember and honor the fallen, and to those who made donations to help defray the costs. For further information or to make a donation, contact the committee at PO Box 4486, Great Neck, NY 11023.