It’s hard to imagine that the modest storefront on the north side of Northern Boulevard, just inside the Nassau County line, is one of Great Neck’s longest running businesses, but it is.
Imperial Surgical Supply, which specializes in home health care items and physician supplies, has been in the same location at 7 Northern Blvd. for over 63 years. 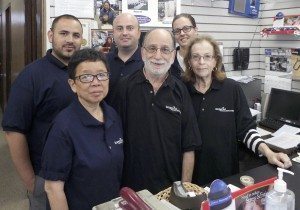 Sandy Edelson, president of Imperial, has been with the company, since 1969, when he responded to an ad in The New York Times and came to work for partners Stan Fox and Charlie Green.
“I saw the ad for a salesman in the paper,” said Edelson, who at the time was a newlywed living in Flushing with his wife, Iris. “They hired me to go door-to-door selling supplies to doctors.” The Edelsons will be married 47 years next month and Iris, who is a registered nurse, has worked along with her husband at Imperial for many of those years.
Going door to door, Edelson helped the original owners develop the physician supplies part of the business to the point where Imperial now ships items to doctors in all 50 states. Edelson first bought out Charlie Green’s share of the business in the late ‘70s or ‘80s—he can’t remember the exact year. He took over sole ownership from Stan Fox in the late ‘80s.
The Edelsons’ son, Stephen, is also a major part of Imperial, serving as its general manager. Stephen, a graduate of Duke University, started working at the store during his summers off from school, briefly worked in the restaurant business, and joined his dad permanently in 1998. “When I started here I did almost everything, helping customers, purchasing, door-to-door sales,” he said. “I’ve been working for over 15 years with my dad and that’s been very satisfying.”
Stephen’s mother gives her son a lot of credit for developing the business. “He changed the business,” she said. “He brought in computers.”
“The big challenge for us today is competing with the Internet,” Stephen commented,” especially on a retail basis. Another challenge is keeping up with technology.”
Medicare procedures are also a challenge for Imperial. “There’s been a lot of changes in Medicare regulations and Medicare has made it very difficult for patients to get merchandise,” Stephen explained. “We try and help our customers as best we can.”
“Most of the people who come to us are not coming here to go shopping, but because they need something,” he continued, referring to Imperial’s comprehensive line of home health care products. “Perhaps their doctor told them to get some particular item or they’re not feeling well. So we have aids to daily living that will help people’s lives better.”
“People can be made more mobile now,” Sandy Edelson added. “People who were destined to sit and not go anywhere now have the ability to be mobile. They can now get out to a mall instead of staying home. There are now so many options to be mobile and we provide our customers with these options.”
“Every time I look back and think about what I’ve been doing all these years, I smile,” he continued. “We enjoy the customers who come in and we get great satisfaction in helping them.”
The Edelsons recently added a culinary twist to the business.
“We often schmooze with our customers because they’re often not feeling well or in a great mood,” Stephen explained. “We try to cheer them up. We get to talking to them about food and lately we’ve asked some customers of different ethnic backgrounds if they have specialties. They’ll actually make a dish for us. Then we take their picture and put it up on the wall.”