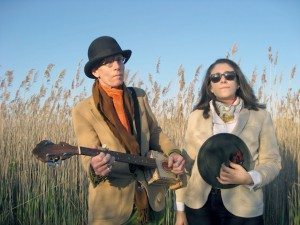 Ask many music enthusiasts what the best music time period was, and you’ll get a lot of votes for music of the ’60s. From Bob Dylan to Johnny Cash to Aretha Franklin, the golden era of music provided the soundtrack to the lives of many, including many who weren’t even born during this time. This upcoming Tuesday, the sounds of the “Soulful ’60s” will be brought to Great Neck Plaza by Nina Et Cetera, the Long Island-based rock, folk and bluegrass duo anchored by vocalist Nina Romano. Mayor Jean Celender said, “Nina Et Cetera’s powerful and soulful voice is a wonderful complement to our concert series venue. Nina is a multitalented artist and her interpretations of legendary music classics are original and inspiring.”

Nina orchestrates everything from playing, to booking, to composing, to recording, mastering and collecting and restoring vintage gear. Each carefully selected piece of gear found and fixed is an important piece of the monotonal puzzle she is so determined to realize and is one step closer to creating the complete picture, capturing the mood and singing about the things she feels are most important. The emotion she plays with has been noted by many in the group’s following, and it will be felt once again by concert-goers this Tuesday at Firefighters’ Park.

In case of inclement weather, the concert performance will be moved to the Great Neck Social Center at 80 Grace Ave. Check with village staff at Village Hall on the day of the concert or call village voicemail after 5 p.m. at 516-482-4500 for a recorded message if the day’s scheduled concert has been moved from Firefighters’ Park to the social center. There will also be an announcement on the village website, www.greatneckplaza.net, if the concert is moved indoors.